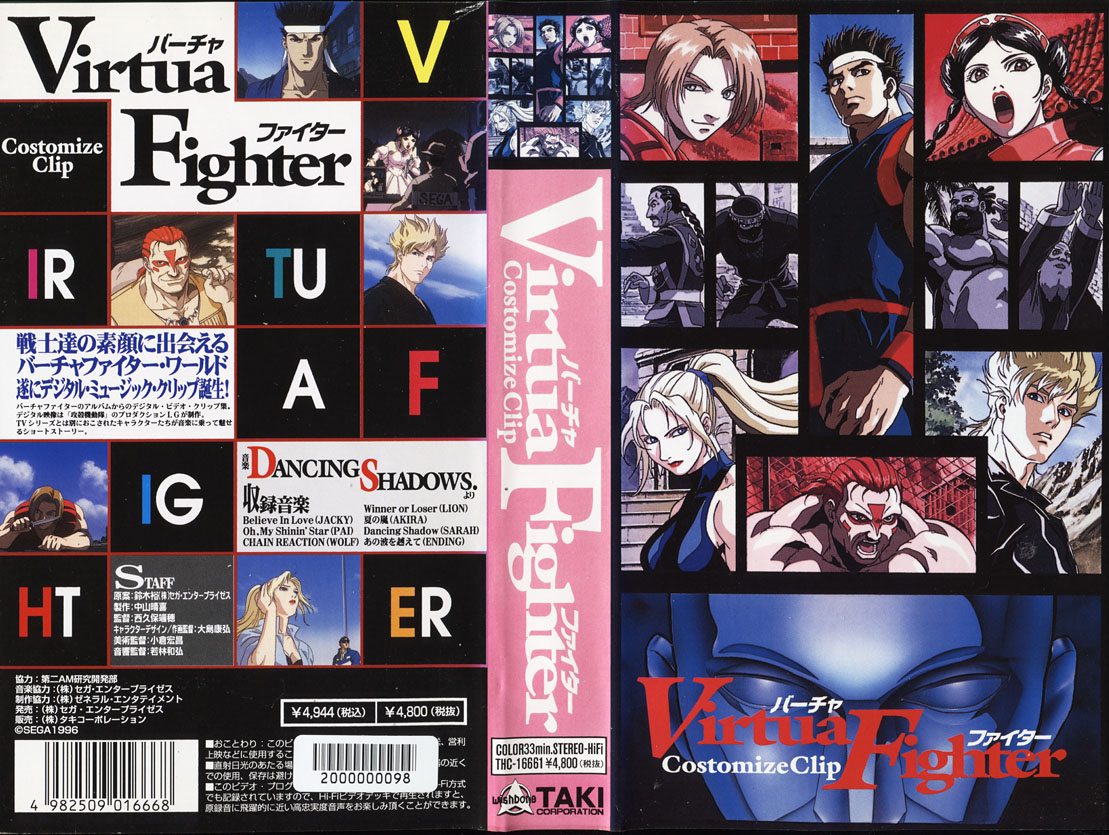 A lot of folks are aware that I am a giant supernerd for Sega-AM2, and their fighting games in particular. Besides owning entirely too much stuff related to Virtua Fighter and Fighting Vipers, I collect various factoids and trivia about the games in an important area of my brain most people would reserve for something like remembering the names of their relatives. One such factoid has been the existence of a Virtua Fighter OVA released in 1996 by Production I.G., a 30-odd-minute outing that’s completely separate from the more well-known TV VF anime by Studio Pierrot. Called Virtua Fighter Costomize Clip, it was released in 1996 in very limited quantities, and it’s so unknown that even Anime News Network’s otherwise comprehensive catalog lacks any information about it.

I’ve been actively seeking a VHS copy out for a while (along with more chapters of Virtua Junky, a mid-90s manga about people playing Virtua Fighter 2), but actually obtaining a copy, even through a proxy, has proven extremely difficult. However, it was recently brought to my attention that the whole thing is now up on Youtube in a VHS rip. I’m not quite sure how I missed it for so long (maybe because I was looking under what its correct English spelling should be, “Customize Clip”?), but what matters now is that it’s found and oh my lord is it ever a nostalgia trip to the height of VF’s mid-90s popularity.

Let’s watch it together, shall we?

So, a bit of background: “Image Albums” were all the rage in the 90’s for anime and games. These were CDs that didn’t really have anime or game music on them, but rather songs about the characters. Most of them were delightfully cheesy: think of how silly Mortal Kombat the Album sounds now and you’ll have an idea. We’re talking CD upon CD of lyrics in Japanese on par with Ooooooooooooh Chinese Ninja Warrior, with your heart so cold~

Dancing Shadows, the Virtua Fighter 2 image album, was a bit better than your typical image album, mostly thanks to the involvement of “I instantly make things more awesome” vocalist Takenobu Mitsuyoshi on certain tracks. The other singers, Yuki Takahara and Takeshi Nishida, aren’t anywhere near Mitsuyoshi’s level, but they still manage to belt out some memorably ridiculous songs about VF characters. Dancing Shadows would be followed up by VF3 On The Vocal, which is one of the best things ever because it actually uses VF3 music as a base and Mitsuyoshi sings every track. The fact that VF4/5 never got vocal tracks and I was forever denied my Vanessa anthem still stings…

Erm, anyway. Dancing Shadows’s songs were used in the Saturn VF Portrait series, and they’re also used in this OVA. In fact, this OVA is essentially a giant, official AMV for selected Dancing Shadows music, featuring the songs and stories (…sort of?) of several VF characters. It’s a truly unique curiosity on several levels as a result, and its existence is virtually unknown. Well, until now, I hope!

The video’s opening song and video belong to the perennially popular Jacky, and details his struggles against the forces of evil in the VF universe, J6.

The video boils down to “Jacky is a racecar driver, loves his sister, got in a horrible accident orchestrated by evil men in black, is very sad about saving his sister. He has a neat little fight with Sarah at the end that ends with the two kind of meaningfully staring at each other from a distance with Jacky. This more or less sets the tone for the rest of the video as a compilation of little VF character vignettes. 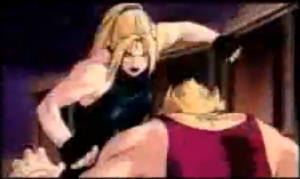 Anyway, my favorite part of this is Aviator Shades Jacky Don’t Give a Shit What You Think: 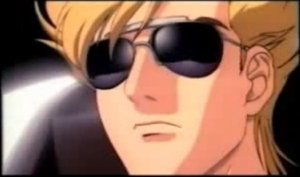 Which would no doubt be my Twitter icon if I wasn’t committed to using Vanessa at all times for basically everything.

Next up is Pai, who fills the fanservice quota with a lot of being cute.

The conceit is that Pai, in VF canon, is a famous Hong Kong movie star, so the video showcases a lot of filmshoot-like imagery, adoring fans, and the kinds of “candid” shots showing mild cleavage that the fanbase of the era ate up. Man, those sure were simpler, more innocent times for fanservice, weren’t they? Overall, it feels like an 80s music video to me, and I’m quite cool with that. It’s pretty nicely choreographed and visually interesting, save for that one mid-90s-CG coloring shot of Pai they linger on for like a minute for no explicable reason save for “whoops, animation budget.” 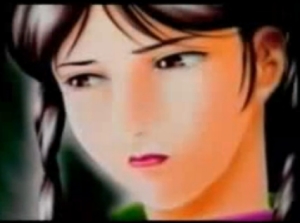 oh my god get on with it already

Then we get “Chain Reaction,” Wolf’s song, accompanied with a heaping helping of imagery that is both utterly puzzling and also really, really gay.

So yeah, this is basically Wolf looking forward to his rematch with Akira, whom he considers a friendly rival.

The way it’s framed, however, means that if you knew nothing of Virtua Fighter, you’d probably assume that this was a story of a friendly lumberjack/wrestler who was waiting to see his martial artist lover again. I mean, just look at all those lingering shots of bulging muscles, Akira looking at Wolf, smiling knowingly, and those dream sequences featuring lushly animated wrestling holds. For the curious: Wolf/Akira was never really a fujoshi thing, but seeing this, you’d certainly think otherwise!1 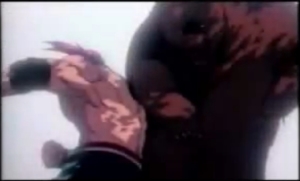 Also, I love that SAVE THE WORLD’S UGLIEST KIDS FROM THE RANDOM ANGRY BEAR WITH A SUPLEX moment.

Speaking of fujoshi, next up is Lion, and oh my lord does this one ever pander hard. If thirteen-year-old polygon-lusting Zero-chan had seen this, she’d have quite possibly imploded. It’s also completely and utterly inexplicable.

This one starts off fairly sane and low-key, with sequences of Lion training and fighting and riding around on a moped. Wheeeeeee! Then you hit the 1:30 mark, and the whole thing embarks on a boat to bonkersville. Literally. 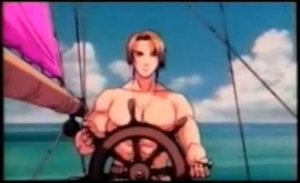 So here’s shirtless Lion, on a boat because of reasons. A few lingering shots of sails, biplanes, and Lion’s holy-crap-you-are-16-how-are-you-this-ripped physique later, the boat blows up and we see Lion floating on either flaming shrapnel or strangely discolored water, I’m not sure which.

A few more somewhat normal images, being frustrated while at some ruins, standing in the middle of rushing traffic. The traffic might seem kinda weird, but it’s a common film image. Then we get lengthy sequences of Lion swimming underwater naked and holy shit I am not making any of this up 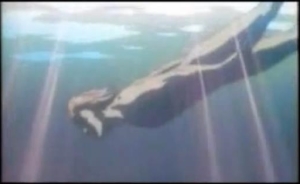 At one point he’s grasping at a glowing thing that vanishes, and I’m sure it’s symbolic of… something, but just god damn even in 1996 these guys knew exactly how to pander to that hungry fujoshi horde. Anyway, we end on a weird structure out in the middle of the ocean. I don’t know anymore, guys, let’s just roll with it.

This is a pretty straightforward story, and also features some of the nicest animation of the OVA (when they’re not blatantly shortcutting with scrolling stills across the screen, at least). Akira is doing that wandering in search of true strength all fighting game protagonists do, stops in a random bar in the middle of nowhere, where he shows a bunch of jerks harassing her that he’s not one to be messed with.

Alas, if you’re hoping for him to Tetsuzankou the shit outta some drunken asshats, you’re going to be sorely disappointed, though he does do a reversal on a bottle. Later on, as Akira’s being bandaged up by the random bar singer, the jerks try to raid the house for revenge. At the end, Akira faces off against the punks in Old Armstone Town, because I want VF and FV to be part of the same universe. I will do whatever it takes to keep the spirit of FV alive GODDAMMIT 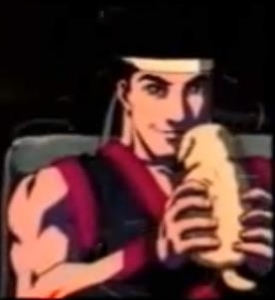 Uh, anyway, that’s about it for Akira. Sarah’s Dancing Shadow is the album’s title track, and a neat – if not particularly memorable – finishing video.

Sarah’s video is surprisingly more… well, I wouldn’t say upbeat, but less outright antagonistic in tone than Jacky’s. You do see a fair amount of pained looks and Sparkly Anime Tears from Sarah, but you don’t see her angrily trying to beat the bejeezus out of dear oniisan. 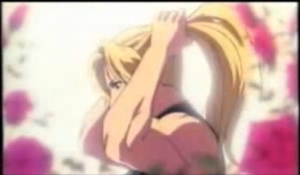 Also: skydiving! (which – VF trivia – is listed as her hobby in VF1-4. How have I retained all of this) 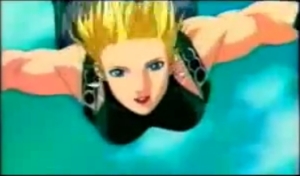 She also cuddles a cute cat at points, which alone would have made this OVA worth viewing. This cannot be argued.

Jeffry’s image song plays over the credits sequence. Alas, Jeff, Lau, Shun, and Kage get shafted, with a few seconds of screentime in Lion’s video and here again with mere credits appearances.2 I’d say “well, clearly Sega looked at the fan popularity rankings and decided who to include,” but that doesn’t explain Kage’s lack of representation, as he’s always been popular. It sucks, too, because Kage’s song is easily the standout of the Dancing Shadows album:

Anyhow, Virtua Fighter Costomize Clip is ridiculously awesome for people like me who lose their minds over VF stuff.  It’s better animated than the TV series, truer to the games (except that Lion thing, seriously, what the hell), and has much better (though still kinda doofy-looking) character designs. Plus, practically nobody knows of its existence, so its discovery is super exciting! It’s somewhat less interesting if VF isn’t a part of your bloodstream like it is mine: this isn’t a forgotten masterpiece of an OVA, but rather, a strange one-off curiosity that manages to be fascinating on several levels. I’m glad it’s out there, glad I saw it, and glad I got to help share it with you folks.

(But I wasn’t kidding about my lingering sadness from lack of a Vanessa image track. sob)