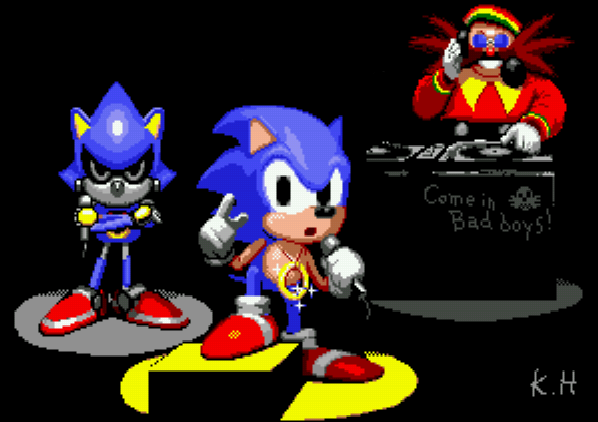 Ahh, the early 90s. It was, indeed, time for Klax, but also time for a sharp rise in popularity of rap and hip-hop music. Anyone who was a kid watching cartoons on North American TV during the late 80s and early 90s was well aware of how companies quite cynically exploited hip hop music and culture to look “cool” and “with it” to the youth. We got all manner of terrible faux-rap theme songs, new and improved character designs with backwards baseball caps, and some of the most hilariously awful commercials ever transmitted through the airwaves.

Game companies were no exception when it came to utilizing hip-hop’s popularity for commercial means, with predictably bad results.

(To be fair, Nintendo would eventually improve Zelda rapping significantly.)

Making a commercial with a rap theme song was one thing, but taking inspiration from hip-hop and combining it with game music was something else entirely. The rapidly improving sound quality of VGM, bolstered by the introduction of CD-ROM redbook audio, gave enterprising game music composers the ability to implement things like samples and voice into their songs, allowing for them to create original rap and hip-hop tunes for games. The songs were still predominantly hilariously bad, of course, but there’s a weird and lovable kitsch to them that makes them incredibly fun to look back on. Most of them, anyway.

So today, we’re going to be looking at several of these awkward game-related attempts at jumping on a musical fad. I’ll be leaving out one really obvious track – the Street Fighter III Third Strike character select theme – since we featured it previously. (I’m also leaving out Parappa because it’s just too obvious.) Everything else on here should hopefully either jog memories or be completely new to you lovely readers. So put on your Reebok Pumps and bootleg streetwise Looney Tunes shirts, and get ready for a game music time warp!

Retro J-game nerds like me will wax nostalgic over semi-obscure companies like Jaleco and Toaplan, but when it comes to the likes of Kaneko, it’s just like “oh, yeah… uh, they sure existed, didn’t they?” When the most noteworthy title in your library is a cancelled game about former President Clinton’s cat, you know you really haven’t made much of a mark on gaming history.1 But they were one of the first companies to jump on the hip-hop bandwagon with the arcade beat-em-up DJ Boy. DJ Boy’s soundtrack is fairly typical for the time, but the sequel, B.Rap Boys, features an entirely hip-hop soundtrack with full voices. Highly impressive (and unusual) for the time!

There’s also DD Crew by Sega. While this game doesn’t have full-on rap beats, the 90s hip-hop inspiration for its music is pretty obvious and pervasive throughout!

On the subject of on-the-ROM music, we’ve also got Tempo on the 32X, which came with a fully voiced (and spectacularly sprite-animated) intro sequence. (Remember when RED produced weird, experimental character platformers like this and Bonk? Those were the days…)

Of course, it wasn’t just Japan that was doing hip-hop intros, either. One of the few bright spots in the otherwise miserable arcade brawler Brute Force by Leland (no relation to the later Xbox game of the same title) was this utterly strange rap that played in attract mode over and over:

And then there’s Radical Rex, which actually has several theme song variations depending on the territory the game was released in. The game has multiple titles, so the song lyrics are changed oh-so-slightly to accommodate. No matter where you go or what it’s called, though, Radical Rex and its theme are still the worst kind of 90s gaming garbage.

Speaking of gaming garbage, you’d think the Sega CD library of awful enhanced Genesis ports and terrible grainy FMV games with redbook soundtracks would be low-hanging fruit, but surprisingly, there aren’t that many half-assed hip-hop songs among the console’s offerings. (You’ve got plenty of the likes of Swing Time and Prime, though.) There is, however, the theme to Slam City with Scottie Pippen, which is a song all about the most tired, unenthusiastic kind of RESPECT you can imagine.

To be fair to the Sega CD, though, the Japanese Sonic CD soundtrack has obvious hip-hop inspirations and it’s fantastic.

I have to plug my favorite games wherever I can, so we need to look at the name entry track from Fighting Vipers 2, which, being a 1998 game, kind of comes in past the tail end of the whole hip-hop VGM craze.

That wasn’t the only hip-hop tune in a 1998 fighting game, though. Here’s one SNK fans have doubtless heard many a time:

Yeah, I think Sega was determined to stick around on this particular musical bandwagon. I mean, we’ve also got this from Sonic Adventure, around the same time:

Really, I think Sonic Team just kind of had a thing for rap lyrics. Going back a little, we’ve got a forgotten Saturn classic’s theme:

Besides Sega, Konami seemed to have a mild hip-hop musical flirtation. A prime example is Violent Storm’s third stage. I… um… look, I’m Clorox white so I probably can’t talk here, but I really don’t think rap works this way.

But as long as we’re on the roll of “not strictly in-game music,” let’s talk about another fairly infamous VGM album: Super Mario Compact Disco by the Ambassadors of Funk. Hell, this article could have just covered this album, all of these tracks (and the DJ segments linking them) are amazing in their own way, though I think my personal favorite is the Mario 3 track. Mario is always cool (like sunglasses).

Finally, let’s end on something obscure and amazing: UK game magazines would frequently come with freebies attached like demo tapes and discs. In this case, an audio cassette came with Mean Machines Sega #2. Called Sega Mastermix ’90, it’s truly emblematic of how everyone in the 90s wanted to get on that hip-hop train to be cool with the youth. (Also: the Master System market in Europe was pretty huge, even in 1990!)

Still eager for more, somehow? Well, there’s one last challenge I have for you – we all know the Super Mario Bros. Super Show had a rap intro, but there was, in fact, an entire episode where the crew goes to Rap Land. I’m not embedding it because attempting to watch it should come with numerous health disclaimers – it really is every bit as atrocious as you could possibly imagine. If you think you can stomach it, click that link, then let me know how far in you made it before you just couldn’t handle it any more. (I tapped out after 10 minutes, and I have a massive tolerance for terrible old stuff, so that should say something.)