The first non-Nintendo Power game magazine I subscribed to was Electronic Gaming Monthly. I was never a GamePro fan, Game Players had atrocious layouts until about 1995, and Gamefan didn’t get distribution in my neck of the woods until around 1995ish, so EGM was the go-to multiplatform magazine I’d buy on newsstands and take to school with me to read with classmates. Eventually, I convinced my parents to get me a subscription for Christmas of 1992.

Let me tell you, being an EGM subscriber in 1993 was an amazing thing. Every month, you’d get this humongous catalog-sized magazine dropped off in your mailbox, filled with screens and info on games for every platform under the sun, along with all the juicy details on the still-far-off 32-bit revolution and the vaporware SNES CD. Yes, the screenshots were generally terrible — I’m pretty sure their initial Mortal Kombat 2 screens were taken with a Polaroid and scanned in — but we all loved them regardless.

But with those gigantic issues came ads. Loads and loads of ads. For many games and peripherals, magazine ads were the best way to get the word out — TV ads were expensive, and they knew there were plenty of kids like me taking their magazines to read at recess with everyone else, so a national magazine ad purchase was an extremely smart buy.

Every so often, I pop onto archive.org’s collection of game magazines and go looking for old ads that I remembered. I’m still utterly mystified by what my brain has chosen to retain memories of, as some of the ads I remember very clearly are, in retrospect, not the sort of things that would likely worm their way into an easily impressionable pre-teen brain.

I want to share some of these with you, readers. They’re not the best ads of the era, nor are they the worst. But somehow, in EGM issues packed to the gills with screaming neon 90s ads that didn’t garner a second thought from me, they left such a lasting impression that I can still recall them. 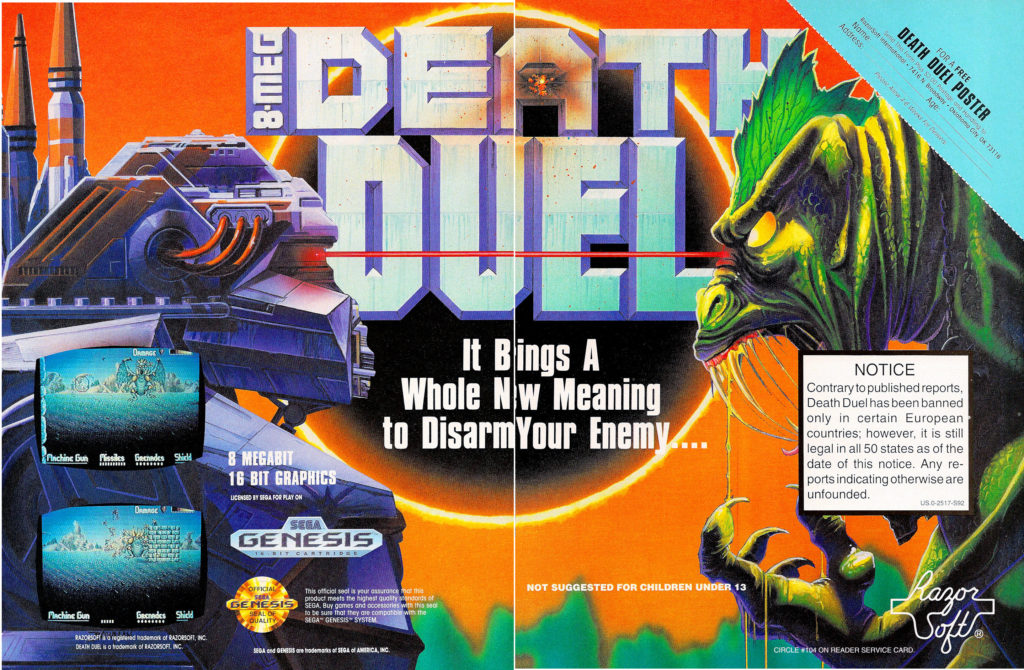 I was befuddled by this back when I first saw it, and I’m still wondering just what the publisher was trying to accomplish with that weird notice. I hadn’t read anywhere that Death Duel had been banned in Europe. This was pre-Mortal Kombat, however, so I think the publisher was basically pulling something out of their ass to make this look like THE HYPERVIOLENT GAME “THEY” DON’T WANT YOU TO SEE!

European readers: if you’ve heard anything about this so-called “ban,” can you give me more details? I’m really curious. It’s something I wonder about to this day. 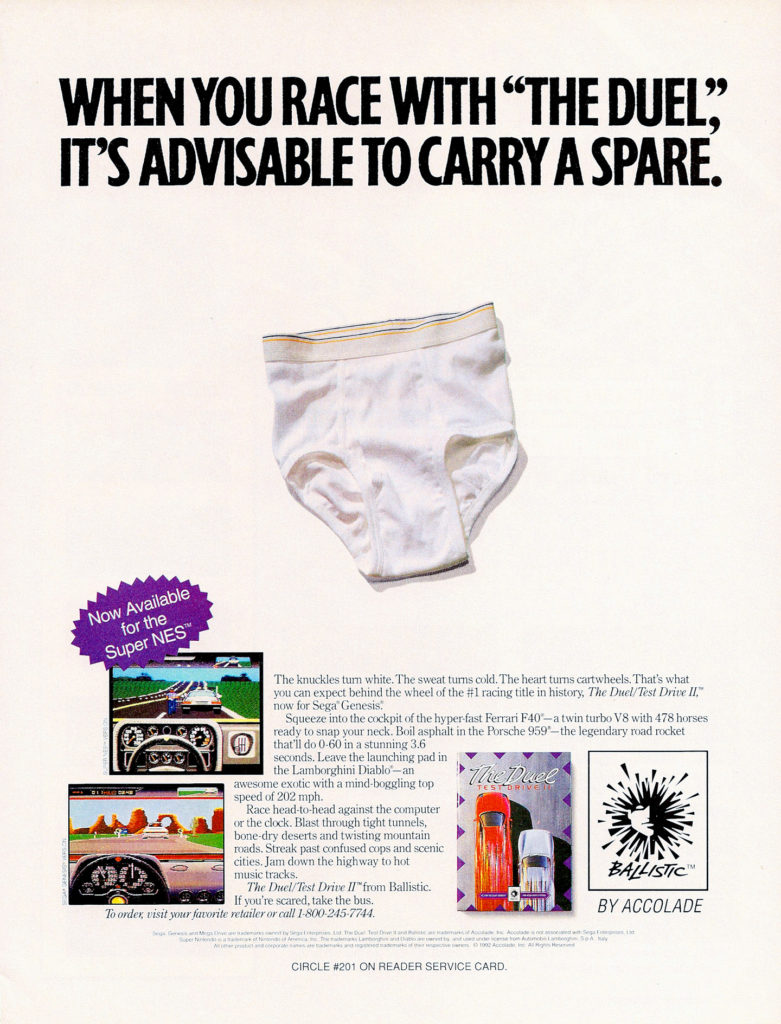 Another game with duel in the title. There was no shortage of 90s game magazine ads that insinuated you would shit/piss/puke on yourself from either hyper-realistic graphics or INTENSE GAMEPLAY (or a combination thereof). Somehow, out of all of those, this is the one I remember most vividly. Why? I have no idea. I had no interest in this sort of game, and it wasn’t like The Duel: Test Drive II was getting bombarded with game magazine coverage or anything. Something about those tighty-whiteys just burned themselves into my brain. 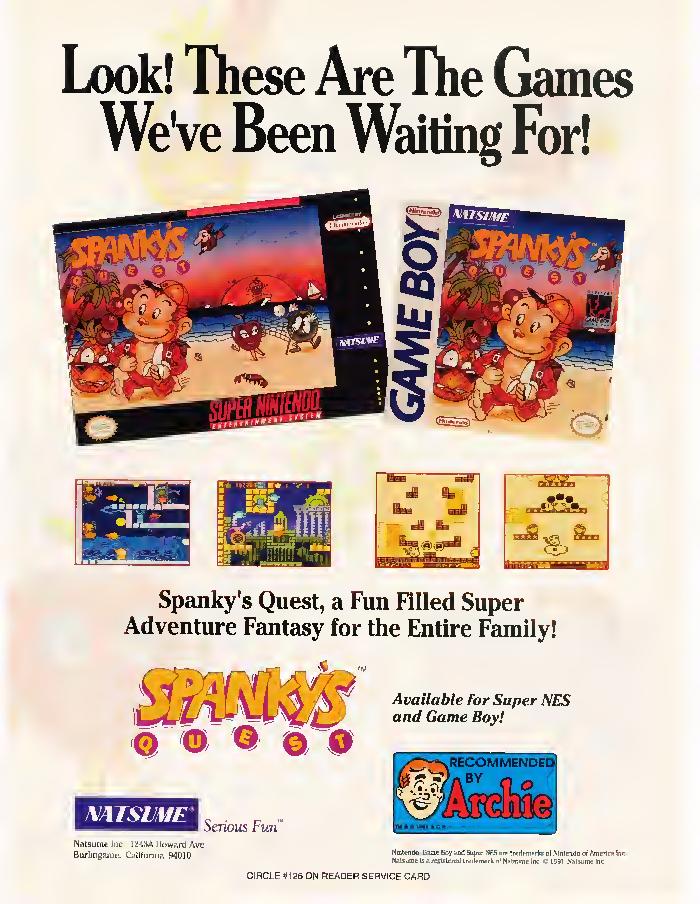 I have never played Spanky’s Quest. I have no idea what the games are about, other than they star a cute monkey. But that’s not important here. What makes Spanky’s Quest notable is that it’s RECOMMENDED BY ARCHIE.

no seriously, what? Remember, this was decades before Archie comics became weirdly thoughtful and progressive. Back in 1992, Archie was probably the most uncool thing imaginable to kids — it was the comic your well-meaning grandma bought you at the supermarket instead of that cool Spider-man issue with Venom on the cover. Why on earth Natsume figured that Archie’s endorsement was worth seeking out,  possibly paying for, and proudly displaying in a game magazine advertisement still blows my mind to this day. 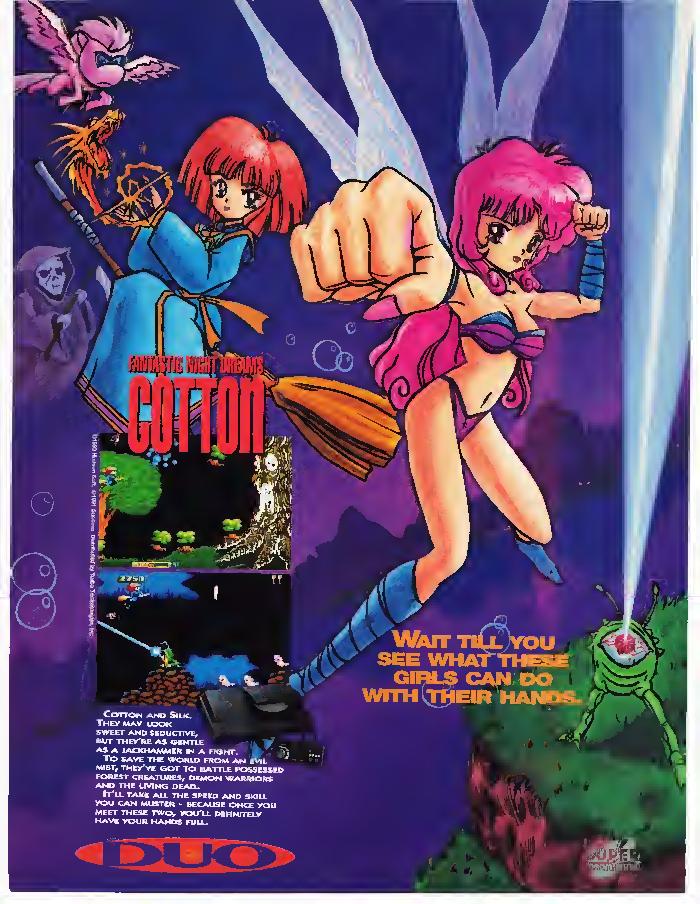 Another hallmark of early 90s ads is really bad sexual innuendo. I didn’t see the infamous Neo-Geo lingerie ad until years after it ran, and even as a dumbass kid surrounded by other dumbass kids making stupid sex jokes1, there was a lot of this that went over my head. Yet even though I didn’t get the “joke,” I still remembered this ad, perhaps because it looked like anime when a lot of Japanese imports were trying not to look like anime. I still have no idea why TTi seemingly traced key art and gave it a shitty recolor, but let’s face it, nobody knows why TTi did a lot of things. 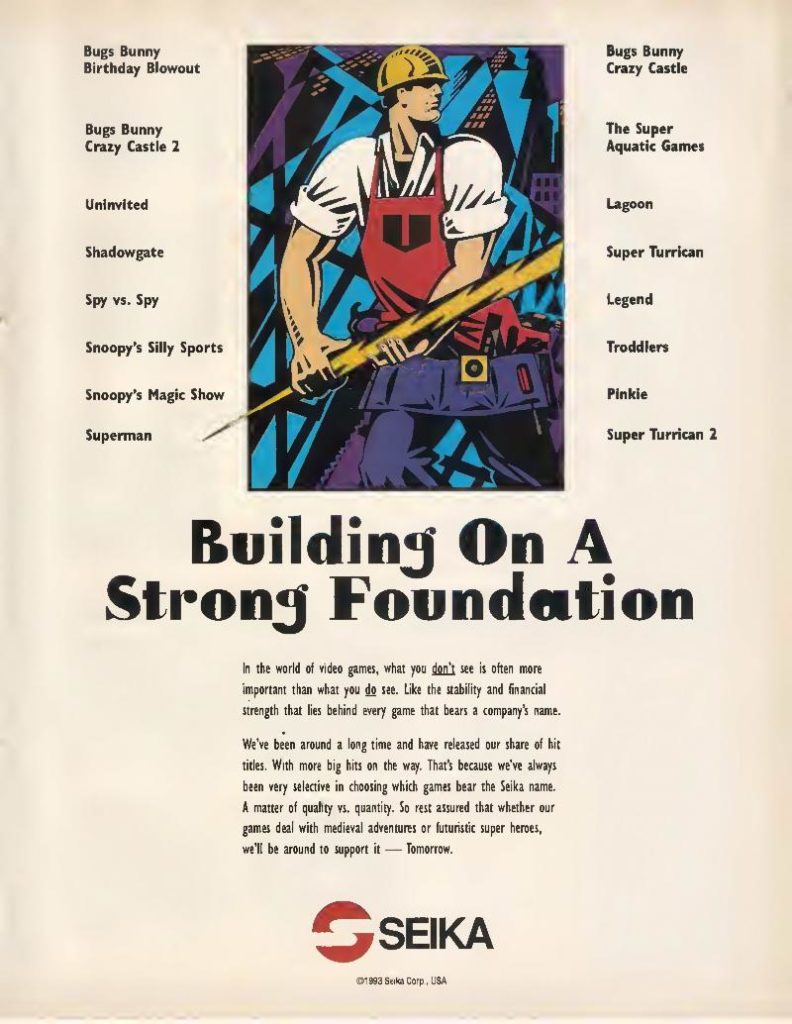 Out of every as I remember, this one ranks as one of the most mysterious. It’s like one of those “awareness” ads for milk or pork or cotton, but it’s for… a game company. Seika, also known as Kemco, to be precise. (The Kemco and Seika names seemed to be used interchangeably and together as Kemco-Seika. Why? Who knows.) This might be an okay ad to run if you were trying to woo investors, maybe, but when you’re surrounded by other ads featuring x-treem kids telling you how this new game’s gonna piss off your mom and make you blow chunks, it seems comically out of place. Also, if you’re trying to show what a strong legacy of games your company has, maybe consider leaving NES Superman off that list.

Also of note: both the US and Japanese branches of Kemco faded into obscurity around the PS2 era, particularly after the debacle that was Batman: Dark Tomorrow. They’re still around, mostly cranking out by-the-numbers mobile JRPGs, but the company fortitude they’re so boastful about here basically vanished a decade later. Such is the games industry. 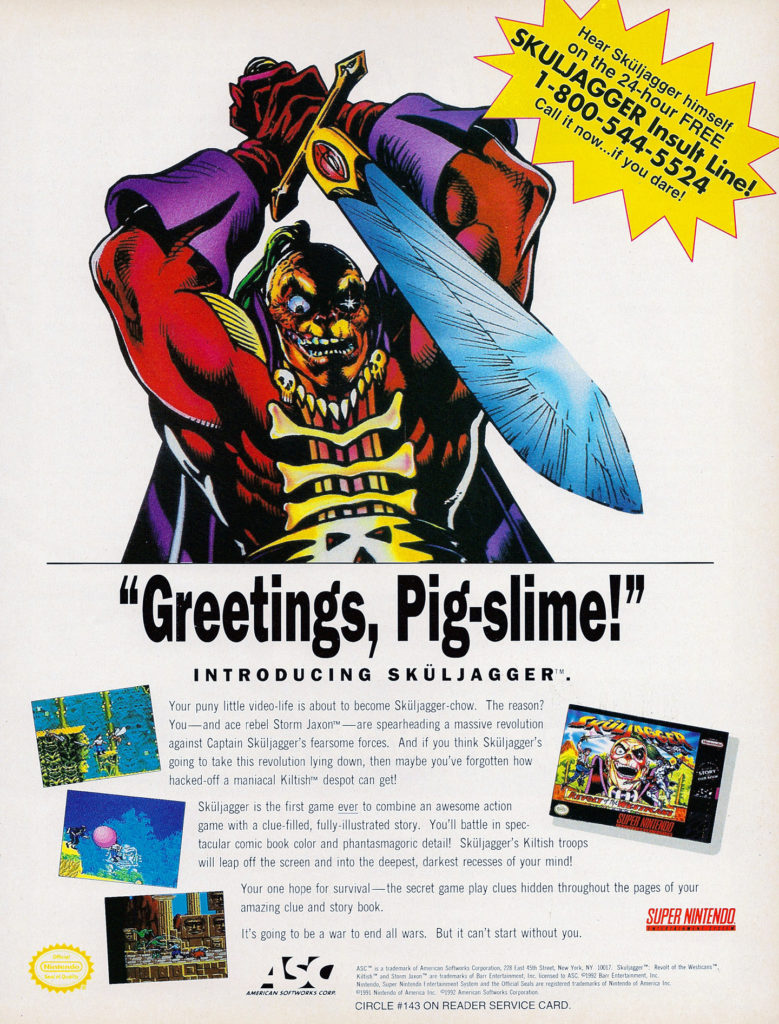 Here’s an ad I remembered much less clearly than many of the others here, but the fact that I remember it at all is still pretty amazing.

It came back to me a few months ago, when someone managed to unearth audio from the Alfred Chicken toll-free phone number. I remembered that there was a brief period where it seemed like a few games had a toll-free promotional number tied in with them, but I couldn’t quite remember what any of these games were. There was one that had an ad with a phone number to call, it was an SNES game, had a Skeletor-looking dude on the cover…

Well, it took some searching, but I finally found it. This is Skuljagger, a weird and by all accounts terrible action/adventure game on SNES that came attached to a 24-hour FREE INSULT LINE. I assume you’d call in and hear Skuljagger himself — or some underpaid voice actor trying his hardest — calling you every nasty word  short of actual slurs. I don’t know, I never called it (though, somehow, I did call that stupid Alfred Chicken number). So I beg you, internet: if one of you people out there has a recording of the Skuljagger Insult Hotline, please share it with us. It’s important. 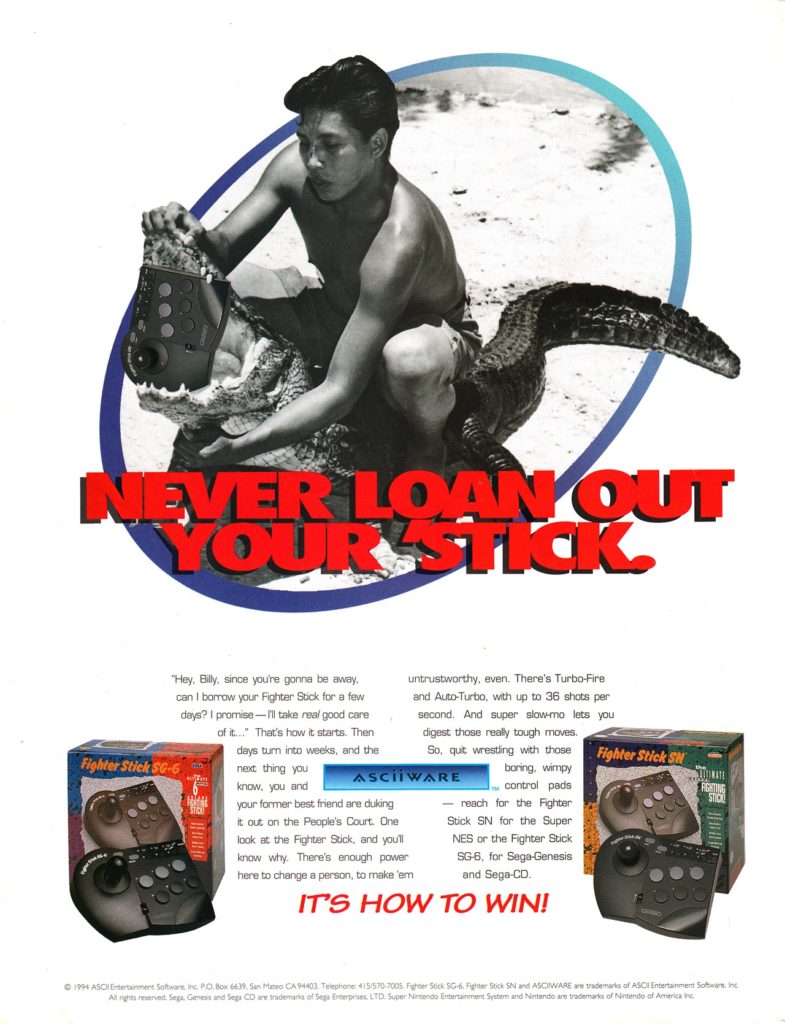 Okay, so I have absolutely no idea why this ad has stick with me for twenty-five years. It’s a bizarre, poorly photoshopped image of a kid wrestling a gator behind red, bold text that sounds like it might have been intended to be innuendo at some point but then had the copy changed a day before it went to print. Out of everything appearing in game magazines at the time, why is this something that I remember exceptionally clearly? Is it the weirdness of the image? The terrible catchphrase? My best guess is that it appeared on the back covers of so many magazines that I saw it constantly between reading EGM or skimming other magazines while mom was grocery shopping. Yet, despite remembering the ad, I still couldn’t remember which of the C-tier 16-bit joysticks it was advertising, so there’s a testament to its (lack of) effectiveness.

Nostalgia for sale: What you're actually buying