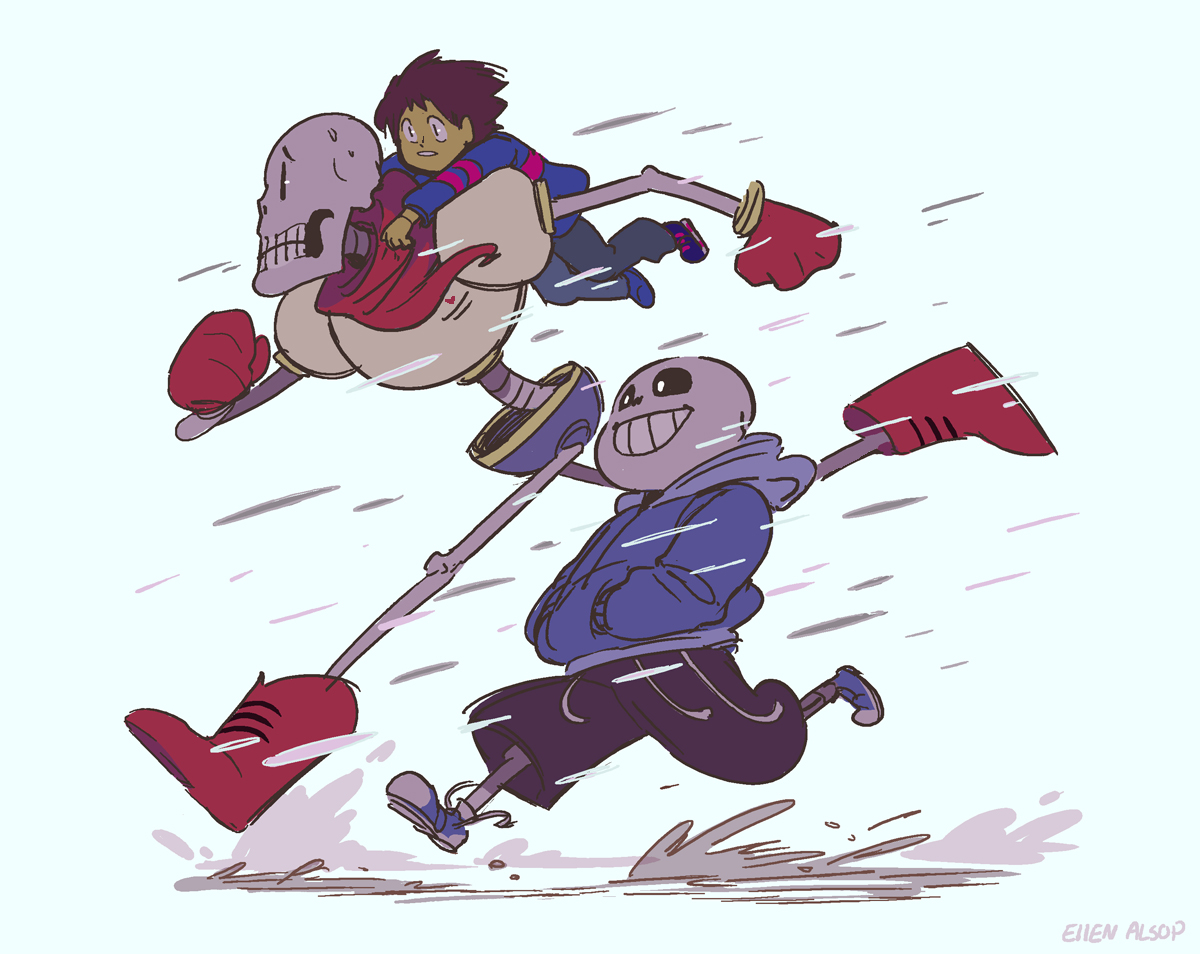 (Header art by ellenalsop from tumblr)

So it’s come to this: I’m writing about Undertale, as is seemingly required of any games journalist worth their salt at the moment. Not that I mind at all – Undertale was genuinely one of the best gaming experiences I’ve had all year, and a game worth analyzing with a critical lens on numerous levels. (I’m only sad that my pile of paid reviews prevented me from getting to it sooner than I actually did, because I could only go into it about 85% fresh rather than 100% fresh.)

I’ve played and finished Undertale on the Neutral and Pacifist endings1. I’ve come to realize that it’s nearly impossible to really talk about Undertale without massive spoilers for the experience, because Undertale is considerably more dense than its short playtime (5-7 hours for each ending in my case) might make it seem. Everything feels deliberately designed to build the game’s world without any dull padding or superfluous filler, which is why the whole thing just feels so darn good – but also why even talking in more than the vaguest terms about the game can detract from the experience. So lemme just go ahead and put this here:

There have already been a bazillion posts written along the lines of “Undertale made me feels so hard that it took me on a feels trip to the Feeld of Dreams where Officer Fielmann arrested me for feelsing myself in public etc,” so I’m opting for something a bit different in this article. It’s clear Undertale takes a lot of influences from other games – the Mother/Earthbound series in particular – but there are a lot of interesting parallels and influences from other titles that don’t seem to have been picked up on as much. I’m going to point a few of these out – and say why I feel the comparison is valid, in some cases.

So, where to start…

The influence of Earthbound and the general Shin Megami Tensei series on combat (and the negotiations you can do with your adversaries)  is very clear. Much of the running battle dialogue is akin to that of EB, and negotiation with foes is a key part of SMT (though, thankfully, Undertale does away with many of the random elements that can make SMT negotiations such a headache.) As I played through battles, though, something entirely different sprung to my mind: the Etrian Odyssey series.

The association puzzled me a little at first – it seemed like the only thing in common was first-person view of enemies during battle at first glance, but then I figured out why: the music of Undertale’s normal battles seems heavily influenced by EO’s battle themes. In fact, I thought the Undertale battle music sounded a bit familiar, and when I listened again to the EO4 battle theme I understood why: they have a very similar structure, pronounced differences in instrumentation aside.

The EO2 battle music shares some similarities as well, particularly in its tempo.

This could well be conjecture on my part, but given that creator Toby Fox seems well versed in game music – and EO is composed by the famous Yuzo Koshiro – I feel like the odds of EO inspiring at least part of the Undertale battle music are fairly reasonable! 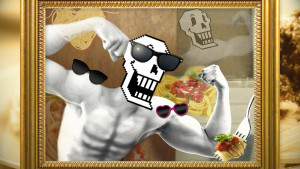 This was a highlight of the game for me, particularly the unexpected moment when the screen filled up with every sort of gaming HUD imaginable. It’s not so much a parody of a “dating sim,” though – the back-and forth banter and the weird overreactions on Papyrus’s part are more Phoenix Wright than anything else. Again, the music betrays PW as an influence, using similar structure and instrumentation, and even going into a “tense” version when things start to get heated (like Papyrus’s freshly cooked pasta, right? ho ho!).

The Fight with Undyne

I’ve pointed out to a lot of folks that this particular encounter – in the pacifist/neutral route, at least – is modeled heavily after confronting Magus for the first time in Chrono Trigger. I’m a little surprised how few people make the association until it’s pointed out, but once you see it, it’s really obvious: The text at the save point saying “The wind is howling”, along with the battle music of similar tempo, are pretty clear homages to one of the most crucial fights in Chrono Trigger… now used in one of the most crucial encounters in Undertale. 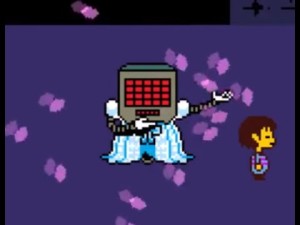 Well, this is a riff on Final Fantasy VI, pretty obviously, but the degree to which that’s made clear is particularly amusing: many of the same instrument samples as used in the FF6 opera sequence (including the battles) are utilized both during the performance and in the obstacle course afterwards.

Dodging enemy attacks in Undertale has an undeniable Cave bullet-hell influence to it. It makes sense, then, that the final form of Flowey would be a horrifying, bullet-spewing abomination akin to many a True Last Boss in Cave games. Of course I got a shock from seeing the Cronenbergian abomination Flowey had become (didn’t we all?), but as the fight progressed on, I couldn’t help but notice how his attacks seem patterned after the “good luck avoiding this volley, chump” Cave TLBs love to throw at you. The music is also heavily influenced by the hectic, high-tempo guitar tracks that accompany such bosses. Take a look at Hibachi from Dodonpachi Daioujou as an example:

The music track that plays for DOOM, the final boss in Ketsui, is arguably even closer in style to the song for Final Flowey:

The Earthbound influence here is again fairly conspicuous – the instruments used in the music are from EB, and hell, one of the amalgamates you battle is pretty obviously modeled after the final form of Giygas – but I feel like there’s more to it than just that. Spooky labs in disrepair with secret information and horrible monsters hidden within are a very common trope, not just for JRPGs but for games in general. Trying to narrow down the exact influences here seems like it’d be tough, though the puzzle-solving and the generally unexpected nature in which the amalgamates engage you feels more survival-horror than JRPG.

What’s also interesting is the composition of the battle music here. In terms of structure, it’s very similar to the main battle music, but the differences – a lot of missing notes and beats, the changed instrumentation – feel as though they are designed to give the player the sensation of “this is a thing that’s familiar but also very, very off,” much like the malformed, undead results of the Determination experiments you encounter here.

Are there any other homages, influences, or similarities to other titles you’ve noticed in Undertale? Feel free to post them in the comments! This is a topic that I’d love to discuss more with folks. (And yes, we all know Tsunderplane is a Touhou.)