WARNING: This review covers an adult-oriented PC game. While explicit images will not be shown in the review, the review text and/or subject matter discussed may be considered not work-safe. Reader discretion is advised.

One of the reasons I started up Gaming.moe was because I wanted to take a critical and analytical eye to games that don’t fit the coverage profile of major gaming review sites. Up until now, that’s mostly applied to under-the-radar releases, indies, and retro games. But No, Thank You!!! is something mainstream review sites really won’t touch: It’s an 18+ game, it’s a visual novel, and the central theme is gay relationships. Yes, it’s a complete 180-degrees from weird old Taito games, but it’s still the sort of game I want to experience and talk about.

“But Heidi,” you say, “Is there actually that much to talk about here? Isn’t the point of Japanese eroge as a whole just to get to the smut scenes?” And to that question (which you, in actuality, probably weren’t asking but I like my hypotheticals dammit) I’d answer “Well, yes, there’s actually a lot of interesting elements to this title, and also the genre’s a bit more nuanced than that but that’s a whole different article entirely!”1

So without further ado, let’s take a long, hard2 at No, Thank You!!!, the first official English release of a Boys’ Love game in quite a long time. 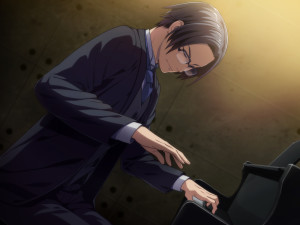 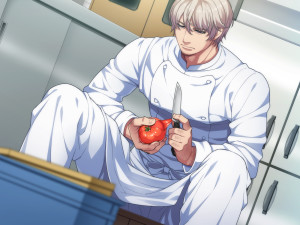 Boys Love (oft abbreviated as just BL) games are a young but growing subgenre, fueled by the strength of Japan’s fujoshi market, and as the name suggests, they’re about handsome dudes making sparkly eyes at each other – sometimes with actual depictions of sex and sometimes not. Several of these titles have become quite popular, particularly publisher Nitro+’s offerings like Lamento and DRAMAtical Murder, the latter of which was adapted (sans smut) into an anime. But despite the continued popularity of Boys Love and yaoi manga in the west, extremely few BL games have been officially translated: localizer J-List says they simply didn’t sell. Several years after these releases fizzled, however, publisher Mangagamer – who kindly furnished my review code, I should note – has released an English translation of No, Thank You!!! by developer pa-rade in an attempt to see if the games will finally start to catch on.

It’s easy to see why Mangagamer picked this particular title – the art’s very professional-looking, the characters encompass a range of bodytypes that give them attractiveness beyond the “wispy pretty boy” Boys Love stereotype, there’s a lot of intrigue to the plot and characters… and there are some pretty hot n’ heavy sex scenes that are more detailed than the standard fujoshi fare. In other words, they’re hoping that an audience beyond typical young female Boys Love fans would find something for them in No, Thank You!!! 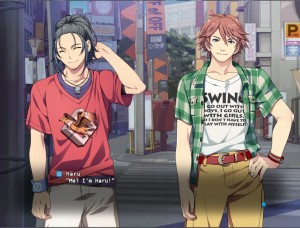 No, Thank You!!! is the story of a young man named Haru, seen above on the left. He’s a goofy, flagrantly bisexual jokester with a strangely endearing naivete. Actually, Haru’s just the name he was given after he jumped in front of a speeding car to protect someone and lost his memory in the process. Ever since then, he’s been living in a tiny apartment paid for by the man have saved, a gruff older guy by the name of Kouichi Inui. To help Haru get back on his feet, Inui offers him a job working at the upscale bar he manages. Thrilled with his new position, Haru is soon working with the rest of the bar’s staff: brown-haired, energetic optimist Hiroyuki, snooty be-spectacled intellectual Ryu, and a big, quiet meat-slab of a chef named Maki.

But why was Inui almost a victim of a pedestrian hit-and-run accident, anyway? The truth soon becomes known after a run-in outside the bar with some thugs: Inui’s bar is a cover for a detective agency that is looking into some cases and organizations that are beyond the reach of traditional law enforcement. Haru quickly finds himself absorbed into the ranks of the team investigating some seriously shady shit. The seedy underbelly our detective crew encounters isn’t pretty, either: As the investigations advance further, some dark subject matter relating to the cases comes to the surface. Instances of abuse, incest, drug use, and other unsavory things are touched upon over the various routes and subplots, so if you’re a sensitive type just wanting to see hot dudes smooching, fair warning – you may find yourself quite uncomfortable at points, even with ample scenes of guys just goofing around in between. 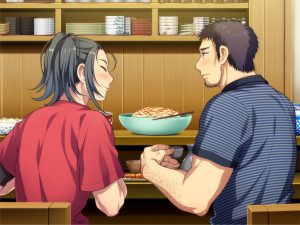 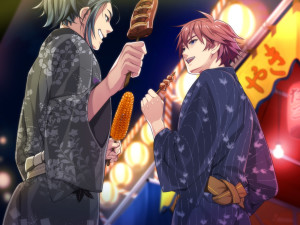 Many BL games tend to follow the visual novel format, and No, Thank You!!! does as well – albeit with a bit of a twist. Every so often, a “No, thank you!!!” indicator with the game’s logo will appear in the upper left corner of the screen. This represents Haru’s intuition that something is amiss, and by clicking it, you immediately change the course of action in the game. It’s different from the usual menu choices you’re presented, which are generally about who you want to hang out with, in that it doesn’t interrupt the flow of the story but has a direct effect on what is currently going on. Clicking no thank you isn’t always the correct choice of action, and figuring out whether or not to take it is key to figuring out how to get the “true” endings of the game. Thankfully, the game gives you an easy shortcut to scoot back to the last choice you had to make if you feel like you’ve gone and screwed up.

Like many games of this type, you’re given choices on which of the four fellow employees Haru should spend time with. Hanging out with your coworkers not only reveals their backstories and motivations and changes some key story points, it also gives ever-mischievious Haru the opportunity to put the moves on them. Though some key plot points always remain the same, the story path you take – and the sex scenes you see – are largely determined by who you opt to pursue in this capacity. The characters are a very interesting bunch, and I was quite eager to see them showcase their more personal sides as their relationship with Haru deepened. This isn’t a case where you can have a harem of sexy men, however: if you try and spread your attentions across multiple partners you’ll wind up with one of the generic bad or non-endings that resolve nothing and often have bizarre events happening out of the blue. The generic “you didn’t get enough flags for a specific route so we’re just ending it prematurely” game over is common for visual novels, but no less frustrating if you don’t have a goal for your playthrough from the very beginning.

No, Thank You!!! drew me into its world of secret crime-fighting bar boys pretty quickly. The dialogue was snappy, well-written, and nicely edited (I think I spotted maybe one typo), and the characters were quick to grow on me with their quirks. Several side characters show up over the course of the story as well – including another bar worker named Ren, who I really wish had a full route – and they tie into the backstories and development of the cast in ways that kept me eagerly reading along. By the time each character’s individual route was beginning to wrap up, I felt like I had learned so much about them that I had new perspectives on what their feelings and motivations for doing this line of work were. The cases and their resolutions were also very well done – I was genuinely invested in the outcome of each and how it would affect the web of character relationships going forward. 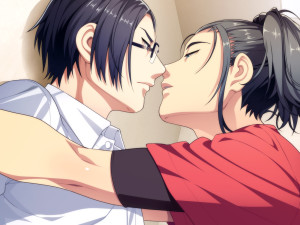 While I’m certainly glad I played through No, Thank You!!!, I also feel not entirely satisfied with it, either. In particular, I feel a bit disillusioned with things that occur in the late game on each route. PLEASE NOTE: I am going to talk about something that may be considered a spoiler (spoken about in the vaguest way possible) from this point on. Please click to reveal.

Near the very end of the game, on any route, there will be a major shift in tone and content as plot revelations occur. This not only puts earlier parts of the game in a different light, but dramatically changes subsequent playthroughs on different character routes in a very distinct manner. While I really, really like that No, Thank You!!! utilized such an interesting narrative device – it’s a sort of storytelling that only really works in a game format – the revelations themselves changed my perception of characters and events in a way that made the game less enjoyable to me, to the point where I was struggling a bit to finish the last couple routes. (One route also ends in a particularly unpleasant way that I found completely unnecessary to get the point across.) I appreciate that the game isn’t all that it seems on the surface, but I just didn’t really enjoy what was underneath that much.

So yes, I think there’s definitely a lot worthwhile about No, Thank You!!! …but it’s something I can’t really recommend without reservations. There’s some great characters and novel narrative concepts here, but the sex scenes are both a blessing and a curse to the story’s overall pacing and the endgame left me rather cold. But honestly, you know what gets me the most? The art in this game is fantastic, but there’s so little unique CG beyond the sex scenes – all these great action sequences just get described in text, and at one point Haru adopts an adorable cat that we never even see! You give me the mental visual of hotties petting kittens and then fail to deliver? For SHAME!