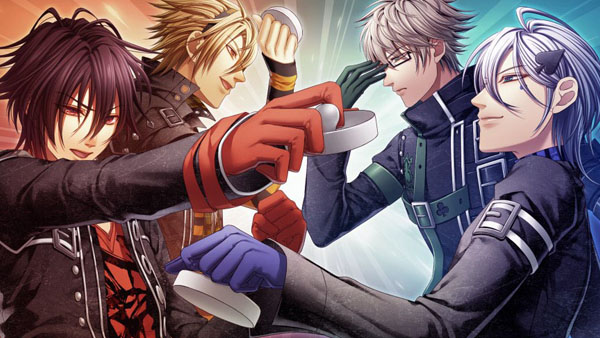 Part of the Gaming.moe mission, as I’ve said before, is to look at and review games that would likely get passed over by bigger review sites for various reasons. Visual novels as a whole are generally passed up for reviews on many big outlets, and that goes doubly so for visual novels that have some element that puts them way out of mainstream accessibility. In the case of No, Thank You!, which I reviewed a while back, that element was gay romance and explicit content, but in the case of Amnesia: Memories, it’s because it’s an otome game targeting a primarily female player demographic.

I’ve written about otome games in the past – it’s a genre that interests me on many levels. Since I wrote that piece a few years back, we’ve started to see a more steady flow of localized otome games come westward, particularly on mobile platforms. They seem to be doing well, as the labels Shall We Date? and Voltage had a very noticeable presence at this year’s Anime Expo, MangaGamer’s bringing over OzMafia!!, and there are hints that Sekai Project might be looking at otome titles as well.

Japanese publisher Idea Factory does some of the most well-known otome games on the market under their Otomate label, some of which have been licensed to US publishers like Aksys for translation. Since Idea Factory now has an official US branch, however, they have an opportunity to publish English versions of more of these games themselves – an opportunity they seized with the English release of Amnesia: Memories on PS Vita and Steam recently. Since IFI kindly provided me a review code for the Vita version, well, I certainly wasn’t going to pass up a chance to take a closer look at one of Otomate’s most enduring titles. 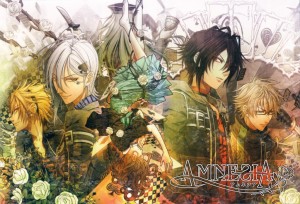 Buckle up, readers, it’s time to mack on some digital boyfriends! 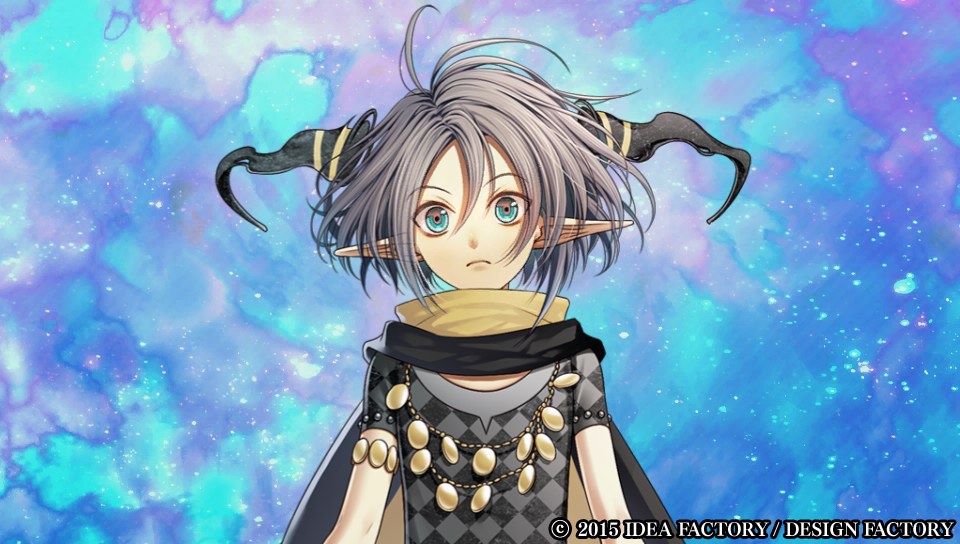 Amnesia begins with you waking up to this cute little fella. His name’s Orion, and he’s a spirit from another dimension usually unseen to human beings. Why is he here, then? Well, in the course of his metaphysical travels, Orion managed to get wedged into the consciousness of the heroine, where he’s currently stuck. Unfortunately, this little incident also managed to displace most of her memories. Orion feels terrible about this accident, and is determined to aid our leading lady in her quest to retrieve her missing self-identity, as reclaiming her lost memories will also aid him in getting unstuck so he can go back to his happy spirit place. Yes, he may have screwed up your life, but he’s quite a sweetie who’s eager to help you out however he can.

You can at least remember one thing from the outset, though – your name. It was at this point when I realized that I don’t have any good ideas in my personal Game Character Name Bank for an otome game heroine. What would be a good name for a character who would likely find themselves in relationship trainwrecks that we as players could see coming but the game character would likely be oblivious to?

Then it hit me, like a car careening uncontrollably off a cliff-

Yes. Perfect. Thus, Toonces, Orion, and I began our amazing journey to smooch all the hotties. 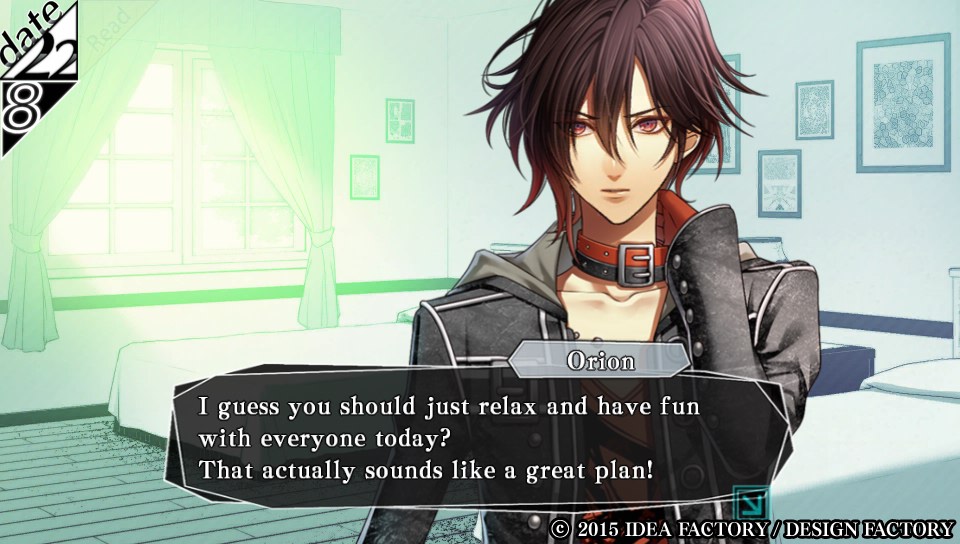 One thing I really liked about Amnesia is that you get to pick the “route” you take from the outset. Many visual novels don’t diverge into different paths until much later in the game, and choices you make early on influence that. However, since you’re still getting a grasp on the characters and setting, you might not know which way you want to go first – plus, since you usually have to dote entirely on a specific character to get a particular path, you usually wind up with a generic non-ending. Amnesia instead allows you to pick from four “worlds” based on playing card suits, each one representing a different reality featuring a similar cast of characters. The object of the heroine’s affections is different in each one, representing a different character archetype: Shin, the cool and tough dude who’s a total softie for his lady; Ikkyu, the flamboyant playboy who secretly longs for a more substantial love; Kent, the aloof and socially awkward academic who discovers true affection; and Toma, the boy-next-door type who has been with the heroine all of her life. Finally, there’s a fifth story that opens once you’ve seen the good endings in all of the other branches that ties everything together and features the “true” love interest of the game – though it’s far and away the most difficult, in terms of it being littered with choices that lead to terrible outcomes.

Amnesia might be one of the most common tropes in video games, but I was pretty impressed by the way it’s presented in this title. Orion warns that you need to try and keep your lack of memories a secret, rather than telling everyone in sight that you can’t remember a thing about yourself. His reasoning is sound: bad people will definitely try and take advantage of you if they know you can’t remember anything, leading you into a spiral of not being able to know who to trust. He also notes that being hospitalized for your condition would make the situation worse, as the only way to recover memories and set him free is to be out and about in the world, encountering things and people that will spark recollections of the past. Some of the routes play the “I need to hide the fact that I have amnesia and that there is also a funny spirit thing coexisting with me” concept more heavily than others, but it remains a constant throughout the game.

Thus, Toonces (or whatever you opt for her name to be – to me, she is forever Toonces) sets out to rediscover what her life was and is, piecing together information from text messages, emails, phone calls, in-person discussions with other folks, experiences at her maid/butler cafe job, and walks around what is pretty clearly Tokyo’s big Ikebukuro neighborhood. (Ikebukuro is the location of Otome Road, a famous enclave of stores and hangouts catering to fujoshi, so the setting is quite apropos.) As things happen, Orion acts as your information collation character, pointing out things and helping you piece together what’s going on from the tidbits you’ve learned. While some players might not like the constant presence of a character who tells you explicitly what’s happening – as opposed to mulling it over and figuring it out yourself – I appreciated his help in pointing things out that I probably would have overlooked. As overly chatty as he can be sometimes, he’s just eager to help, goshdarnit! 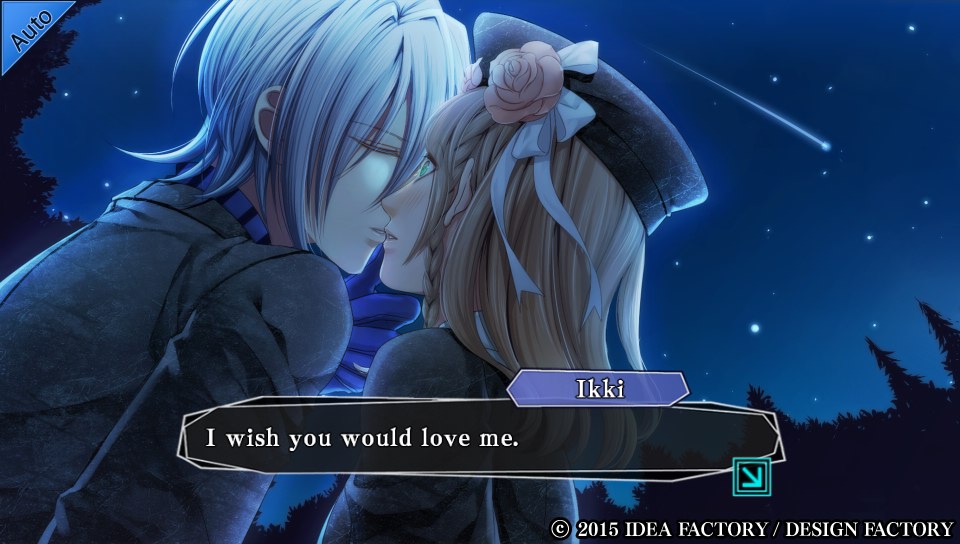 The way the story events play out – and the roles each of the recurring characters take – is different in each path: an antagonistic coworker on one path might be more amicable on another, for example. Every one of the stories is different enough to be interesting and engaging in its own right, and there are multiple endings to each – “normal” (more like “kinda bad”), “bad,” and “good,” all of which stem from the choices you make throughout. While the mood is generally pleasant for the majority of the game, there is some subject matter that might make some folks uneasy, especially on the Towa route and the final route. (PROTIP: do not play the Toma/Diamond route first because holy shit) It’s got a lot of romance and shoujo-manga tropes, yes, but I didn’t really care: I was far more interested in seeing how the relationships between everybody would resolve than analyzing where I’ve seen a particular plot element before. It’s not mindblowing game writing by any stretch, but it is a fun read. The finale is particularly neat, putting everything together in a way that’s both surprising and satisfying – provided you can make your way through the bad-end minefield to see it.

My biggest issue with Amnesia is that the good endings are a bit of a pain to reach. I firmly believe that there’s absolutely no shame in using a walkthrough to get the best ending after you’ve seen the normal end, just to save yourself time repeating choices over and over. (I used this one, which is very comprehensive and not too spoilery.) In the PS Vita version – the one I played – you get trophies for unlocking all the good, bad, and normal endings – along with all of the special CG scenes – so if you’re a completionist, you’ll want to go through several times and see everything possible. Thankfully, the game isn’t stingy with save slots (and remembers all read text in the system save for easy skipping), so you can easily make a bunch of saves at different points to make accessing ending variants a cinch. 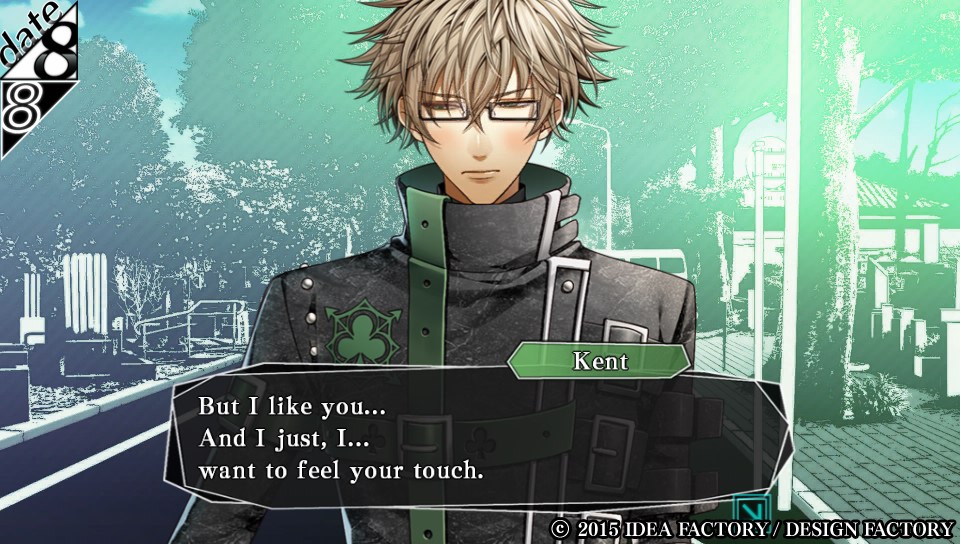 Kent’s my favorite dude. I mean, just look at how cute and awkward he is awwwwwwwwww  :3

I can’t really speak for how the Steam version runs, since – like I said – I played this one on the Vita, but from what I’ve heard from people who have played it like Elly, it’s pretty similar. (Though the presence of another popular series on Steam makes this a prime example of “maybe you folks should have seriously considered retitling this one for international release.”) There are a fair few issues with the English text on Vita – running out of display space, weird formatting, and holy crap does the final chapter deteriorate into typo hell. I seriously hope that future Otomate game releases from Idea Factory International will get a bit more care in that regard.

I enjoyed my time with Amnesia: Memories a fair bit. It didn’t blow my mind or anything (well, aside from the what is is even going on here help reactions in Toma’s route), but it was an enjoyable diversion that took me on several little journeys through romantic escapades. I liked the premise, I liked the characters (mostly), and I liked the overall presentation (though seriously, devs, that posterized-photo background stuff gets tiresome on the eyes super quick). Nothing here is going to rock your expectations of gaming narratives, but it will probably be sufficiently entertaining if you just want some stories about male/female relationships with a slight fantasy twist. I hope it bodes well for more of this stuff getting released down the line – especially on PC – as it’s still a very underserved niche outside of Japan. 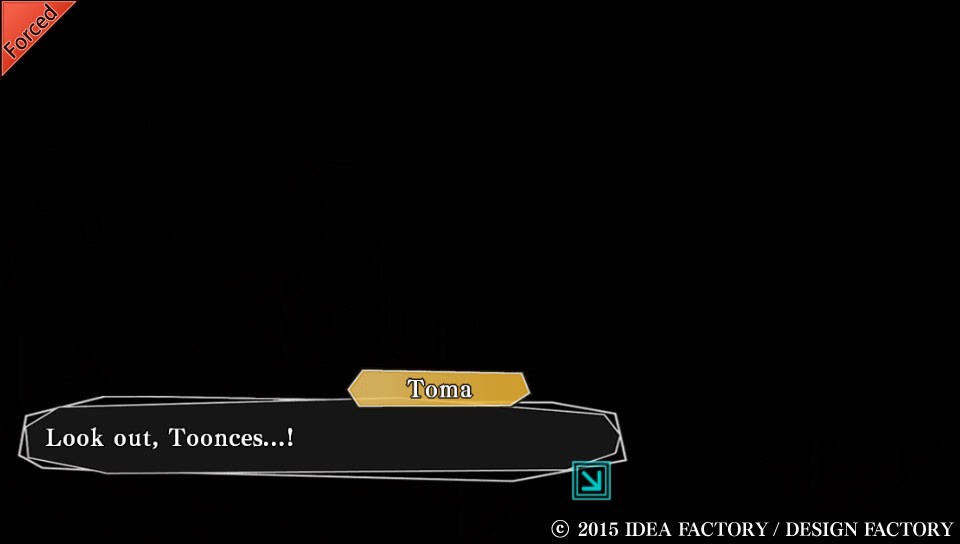 And yes, the name choice paid off tremendously.

Incompletionism: The Games I Wanted to Review