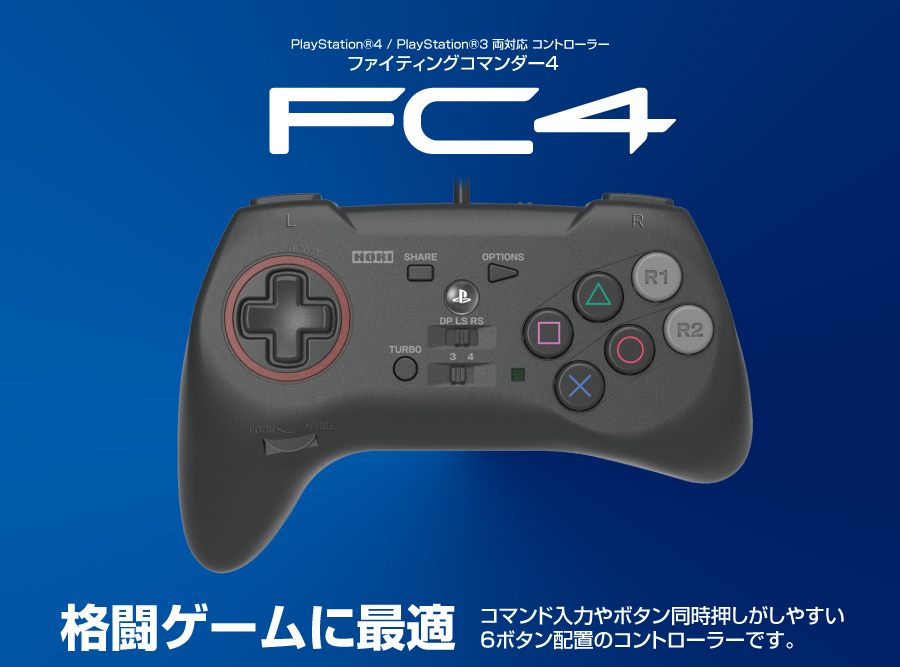 If you asked me what the worst part of the last console generation was, I’d probably say “too much overproduced yet soulless design-by-marketing-committee games.” But perhaps, on occasion, you might catch me complaining about the controllers. As far as I’m concerned, last gen was the absolute dregs when it came to controller design: the 360 pad was ergonomic but had possibly the worst D-pad ever inflicted upon mankind, the SixAxis/DualShock 3 fixed approximately zero of the issues with the previous DualShocks (clunky ergonomics, still-awful D-pad, and horribly placed convex analog sticks), and… well, I mean, the Wii Remote should probably go without saying.

Then again, my taste in controllers is a little odd in general – after all, I love the GameCube controller for games that aren’t Smash. My favorite controllers are generally third-party or custom-made options, though I’ve had really good luck with HORI products in the past. (Hell, I owned – and rather liked – that crazy Dragon Quest slime controller they made!) I’ve been looking to get a new digital-input-centric pad for my PS3 for a while, but I was never able to jump on the Fighting Commander 3s when a limited amount were made available Stateside, and their aftermarket prices wound up being downright stupid.

Cut to the present day, where I have acquired a PS4 and Guilty Gear Xrd, and it’s looking like the PS4 will be the console of choice for future fighting game endeavors.  I wanted something nice to play 2D-heavy games with, but I was disappointed to see that many games still do not support PS3 controller backwards compatibility (which simply require the implementation of a freely available driver – seriously, what’s the excuse?), meaning I can’t use my custom stick. After surveying some folks online, the HORI Fighting Commander 4 emerged as a good option – I wanted a pad more than another stick right now, it was backwards compatible with the PS3, and my experience with HORI products has been overwhelmingly positive. Even better, Play-Asia had the controller on sale at the time – along with shockingly cheap overseas express shipping – so I figured now was as good a time to take the plunge as any. Did the Fighting Commander 4 live up to my high hopes? 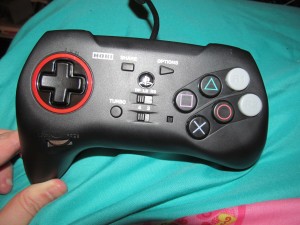 The first thing you might think when you see the FC4: “Hey, isn’t this thing a little lopsided?” Indeed, the design concepts here seem to have been lifted from Capcom’s old CP Soldier – a strange-looking but ergonomically brilliant fighting game controller. 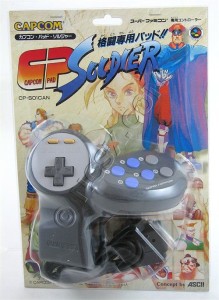 Shame that NCS is sold out of them now, they’d make a neat mod.

The CP Soldier was designed so that you could hold the controller’s weight entirely in your left hand, while you splayed your fingers across the two rows of three buttons – similarly to how you’d do so across rows of arcade buttons, essentially mimicking the arcade layout in a smaller form factor and minus the stick. Like the CP Soldier, the FC4 has a longer “wing” on its left side, allowing you to hold it with your left hand while all the fingers of your right hand wait eagerly to react on the buttons. The right side still juts out just a little, however, which means you can go to holding it like a “standard” controller quite easily depending on the game you’re playing and your personal preferences. 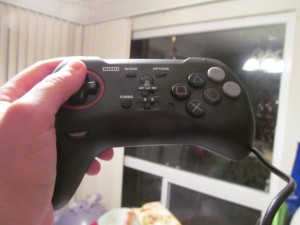 Holding the controller with the left hand is a fair but more comfortable than you might think – the FC4 is weighty enough to feel sturdy, but light enough to not fatigue you if you’re holding it this way for long stretches of time. Not having any force-feedback functionality definitely helps keep the controller from being too heavy (and from being distracting).

While the CP Soldier angled the D-pad and the buttons differently, the Fighting Commander 4 keeps everything on a more level face, which makes it easier to use the pad for stuff that isn’t fighting games. The most obvious comparison for the general face layout is the much-beloved Japanese Sega Saturn control pad, though unlike that pad, the buttons are all uniformly larger-sized. The R1 and R2 buttons, repositioned to the right of the standard PS button array, are colored a lighter gray, unlike on the FC3Pro where they were also colored black. Honestly, I think I would have preferred the original black coloring, as the gray contrasts a bit too much with the heavily black color scheme. 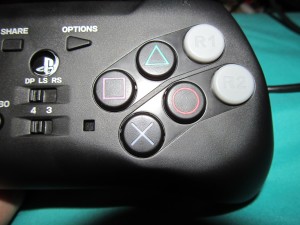 While there’s no touchpad, the Share and Options buttons are present, and convert to Select and Start when running in PS3 mode. Speaking of PS3 mode, the bottommost switch is there to toggle between platforms, so make sure you swap it before you plug it in to the other console! This replaces the FC3Pro’s turbo slider – the turbo fire is instead turned on and off by a small button to the left side of the slider. The center switch changes the functionality of the D-pad, and allows for “simulated analog” input of the left and right analog sticks. It’s a whole hell of a lot less precise than genuine analog, so you probably shouldn’t use it except in places where you need to use analog very briefly (i.e. character model viewers). 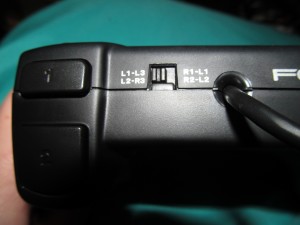 As you can see, the FC4 is strictly wired. Since it’s primarily marketed as a fighting game controller, this makes sense – most fighting game tournaments disallow wireless controller use. Another switch located on top of the controller lets you quickly remap the shoulder button pairs. You can keep the standard L1/L2-R1/R2 setup, though this means you’ll have two sets of R buttons (two on the face and two on the shoulder). By flipping the switch, you can change the right shoulder buttons to L3 and R3 (typically the analog “clicker” buttons) instead. If you’re doing the whole one-hand-holding thing, this gives your right hand access to eight unique buttons rather than just six. 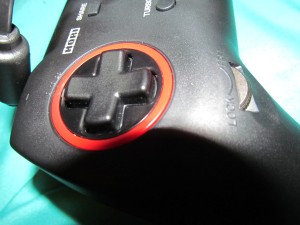 Here’s where things get really unusual. See that metal wheel bit below the D-pad, on the base of the left controller “wing”? It’s a control for a mechanism that holds the D-pad in place. By moving the metal wheel from “LOCK” to “FREE,” you can actually move the D-pad’s position on the controller face up to twenty degrees diagonally. Moving it back to “LOCK” will set the D-pad in the position it’s currently at. 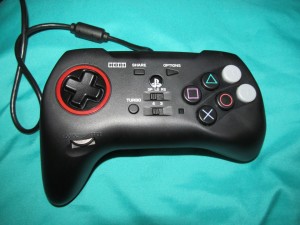 The idea here is that having the ability to angle the D-pad allows the player to both hold the controller one-handed at a more comfortable angle while still allowing accurate inputs, and to make certain inputs easier. In my testing, it definitely helped with the former but not so much the latter. (Then again, I think I just kinda suck at Tiger Knees as a whole. Gotta practice!) In some reviews of the FC3Pro, I saw complaints that even on “lock” the pad could shift out of place during periods of heavy use. While I haven’t experienced this yet myself with the FC4, I do feel like this could definitely be an issue as the controller sees accumulated usage. 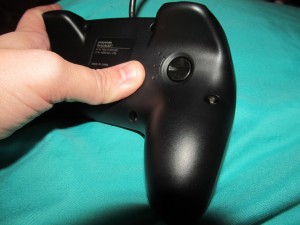 The other, and in my opinion far cooler, gimmick is this dial on the back. Using a screwdriver, a coin edge, or a fingernail (which, as you can see, I lack), you can press and turn the dial to one of three settings: L, normal, and S. Changing to L increases the active area of diagonals, allowing a diagonal input to register with a less precise press, which the manual recommends for use with fighting games. The S end of the dial reduces the active diagonal area, which works better for games that require quick, precision taps and movement. It’s a very cool and very clever feature.

But even beyond the gimmicks, how does the D-pad feel? Well, the answer is “pretty darn good!” I do miss the slightly softer edges/plastic construction of the D-pad on the Mad Catz Fightpads, which I used on my X360. However, the big issue I had with those controllers was the weirdly “mushy” feel the D-pad had overall – there was simply too much space beneath and surrounding the disc, and though it was comfortable, it meant a lot of inaccurate inputs for me. The D-pad on the FC4 is leagues better in that regard: the area it moves around in is much smaller, making for more accurate inputs as a while. I’ve heard some folks complain that it wears on their thumbs after a while, and I must say I don’t really see where they’re coming from in that regard. Pretty much every D-pad’s going to numb-thumb you after a while.1 Those comments leave me scratching my head and saying, “Buddy, you ever tried using that segmented piece of crap on the standard PlayStation controllers for any length of time? Now that’s a thumb-wrecker.” Overall, I’d say the D-pad, while far from my favorite, is definitely better than average in terms of comfort and accuracy.2

As for the extra functionality, the diagonal active area enlargement/reduction works as promised: I tried it on a wide variety of titles (2D fighting games, platformers, STGs) and changing the settings made a very noticeable difference in almost every case. Generally, I found the default active area setting to feel the best overall, though I personally found that enlarging it when playing certain characters in fighting games (In particular, characters requiring a lot of in-succession circular movements) made play considerably easier.

I had zero problems with the PS3/PS4 compatibility, and even better, it also works with PCs just fine. When I plugged it in for the first time, Windows 7 recognized it with no issues. I tried it out on a couple of doujin games on Steam – Crimzon Clover, Chelsea and the 7 Devils (that’s definitely one for the Gaming.moe review pile!) – and it worked perfectly, with the games supporting all of the face and shoulder buttons. MAME also gave me no problems with the controller at all, though I did have to switch it to simulated analog stick movement in order to select options in-program with the D-pad. 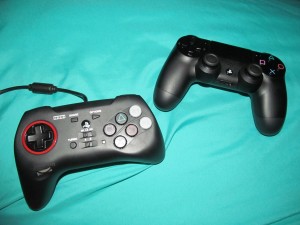 So yes, I’m very happy with the FC4 so far. As a traditional D-pad for 2D games – the primary reason I bought it – it’s excellent. It feels comfortable, has a good feeling in the hands and a versatile button layout, offers that really neat active-zone-adjustment feature, and works on three separate platforms – meaning a good value for the money. Perhaps things may change as this pad gets used over time, but right now, I feel like a made a great purchase. HORI’s overseas branches aren’t selling these yet (let’s hope that changes soon), but you can get it through most importers. Play-Asia had the FC4 on sale for $38 when I bought it, but the price seems to have gone back up to $50 as of this writing. It’s still a pretty good price, considering what a stock DualShock 4 runs.

Hey, did I mention I actually really like the DualShock 4? Er… maybe I shouldn’t get started on more controller nitpicking…

(Sort of) Review: Why NES Remix maddens me