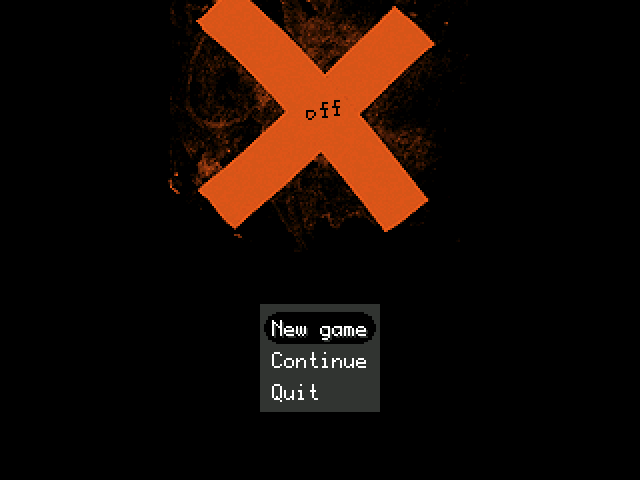 One of the biggest frustrations of being a JRPG fan is the constant blanket dismissals of the genre from both players and the media. You’ll hear that JRPGs are juvenile, that the stories are garbage, that they’re filled with hackneyed character tropes and poorly written dialogue. It’s annoying because we know, deep down, that there are far too many JRPGs out there to which those complaints apply perfectly.

Yet the genre is brimming with unexplored potential. In fact, I’d argue that the format of the JRPG – a linear adventure punctuated with story scenes, exploration bits, and combat – is one of the best out there for telling fantastic stories in games. It allows us to engage with a large cast of characters, explore and understand the complexities of a world not our own, and take part directly in the physical and emotional struggles of the characters that populate these fantasy realms. The potential for so much awesome world-building, character development, and emotional depth is right there, and yet so often it’s squandered on yet another variation of The Continuing Adventures of Team Anime Archetypes.

That’s why games like OFF make me very happy, because they remind me that JRPG styled games can be more. So, so much more. 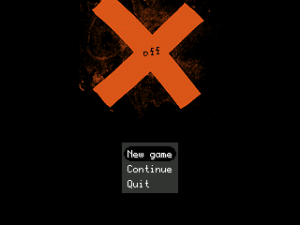 OFF is a freeware PC indie RPG made in RPG Maker. It’s the brainchild of an odd Belgian fellow who goes under the handle “Mortis Ghost” and his dev team, Unproductive Fun Time (which may just be the best developer name ever). Originally released in 2008 in French, OFF was fan-translated into English around 2011 on the Starmen.net forums and has been something I’ve been meaning to play since. I finally got around to it just recently, and now I’m ever so glad I did.

OFF puts you in charge of The Batter, a humanoid (though, the game notes, not truly human) being who looks like… well, a baseball player. I say “puts you in charge of” because the game also makes sure to note that you, the player, are a character involved with the story – something that’s easy to forget during certain stretches of play but becomes quite important. The Batter exists to purify the world of terrifying beings called spectres, you see. This is explained to you – along with many other aspects of the game – through the first NPC you meet, a wickedly grinning cartoon cat called “The Judge.”

Not long after you start, you get a chance to explore the greater world of OFF which is subdivided into smaller areas called “Zones.” There’s a sense of alien-ness and unease from the first moment you set foot into these environments: the simplistic layouts, lack of detail, and overpoweringly bright, solid colors convey a sense of artificiality that’s undeniably unsettling. You soon meet other characters – mysteriously well-informed masked merchant Zacharie, the pathetic, perpetually-wheezing residents of the Zones known as the Elsen, and silent, ring-shaped party members described to you as “Add-Ons.” You also discover that each of the zones is ruled over by a Guardian, and that these Guardians seem to be tied to the infestation of spectres. 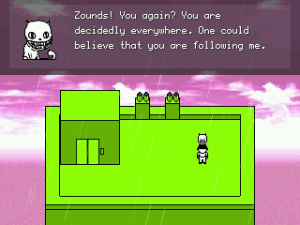 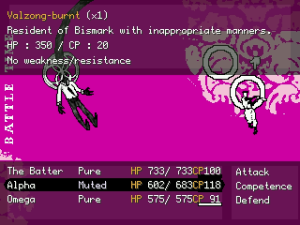 The world of OFF and the pervasive feeling of discomfort the various locales elicit is one of my favorite things about the game. The rules of the world are described to you through old-timey book illustrations describing how the game’s four elements – smoke, plastic, metal, and meat – are essential to the world’s survival. The Elsen inhabitants speak to you in a constant gasping sound, as if the mere act of communication is somehow utterly terrifying to them. Spectres begin to appear, and look fairly cartoony and benign at first, but then you see the fear they induce take hold of the Elsen, transforming them into bizarre, barely-human abstractions. So much just seems out of place, from the stark contrast of black and white characters against the bright-colored environments to the utterly unexpected animal enemies – there are even cute duck-shaped vehicles you’ll need to ride at certain points. It all feels like it just doesn’t belong, and even when you finish “purification” of a zone… well, I feel like saying anything more would spoil the experience more than I’d like.

But OFF never feels like it’s weird just because. Even though there’s the ever-present sense that everything is distressingly out-of-place, you never feel like the game’s world doesn’t have an internal logic (utterly bizarre though it may be). The world of OFF is cold, strange and uneasy, but it’s also engaging and believable. And have I mentioned how amazing the soundtrack is? I typically prefer my game music to be more melodic, but the music in OFF fits utterly perfectly. The way it enhances the world’s atmosphere is truly exemplary. 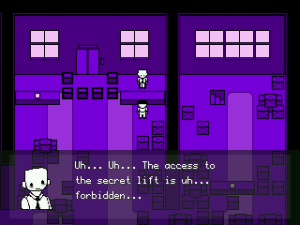 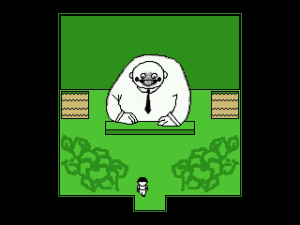 The game is also very, very heavy on symbolism and abstraction. The game doesn’t explicitly spell out its symbolism for you, either – it expects you to look at things and theorize for yourself. While some folks might bemoan a lack of concrete answers, I think it’s quite a nice change from typical games writing where every single plot element needs to be spelled out for the player in big block letters because they assume you won’t figure it out otherwise. The web is filled with countless theories as to what the game, its characters, and its world mean, but even creator Mortis Ghost himself seems reticent to give concrete answers. I think he knows that, in cases like this, it’s better for players to not have all the information.

Some of you have probably read this far and are thinking that this sounds like some kind of pretentious indie “art game.” In a way, yeah, that description isn’t totally wrong. Unlike a lot of “art games” I’ve played, however, OFF is also consistently entertaining. You’re always interested in learning more about this strange world, in getting new clues that might help you piece together more of what’s really happening, in encountering all manner of bizarre new foes to battle. 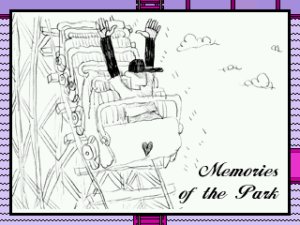 OFF isn’t a long game – you’d likely be able to wrap it up in a day’s time, or perhaps over the course of a few evenings like I did. (Given its short length, I have no idea why I put it off for so long [pun not intended], but it’s probably the result of a massive backlog clouding my “I need to play THIS next!” judgment.) Given that it was made with fairly old software (RPG Maker 2003), it might run a bit strangely on newer PCs – my Windows 7 64-bit system ran into a few issues with screen flickering and music warping at times. The game costs you nothing except the time you’ll spend downloading, setting up, and playing it, and it is something that will likely stay with you for quite some time. I could talk about some of the game’s flaws – combat’s pretty simplistic, Poison is overpowered, and I was quite sick of block-touching puzzles by the end – but you know what? The overall experience renders those pretty insignificant. I only hope that this and other great genre examples can help open peoples’ minds to what game stories told in the JRPG mold have the potential to be.

(Images are taken from Panzer Skank’s text LP of the game, since I had a fair amount of trouble getting screenshots of my own. )