One of the most awkward feelings in the world is seeing everyone around you get excited for something and not being able to partake in said excitement. I get that feeling every time a Level-5 game is announced for localization (or, really, just announced in general). Folks on the professional and consumer side of things seem to get super hype for anything Akihiro Hino’s team from Fukuoka cooks up, while I find myself kind of sitting on the sidelines trying hard not to rain on anyone’s parade. Because frankly, I really don’t like Level-5.

“But Heidi!” you say, completely hypothetically, “What’s not to like about Level-5? They’re one of the few Japanese developers investing in big, beautiful games that have global appeal! They’re proof that Japanese game development can still be on par with Western AAA offerings! Isn’t that a good thing?”

That wouldn’t be an incorrect statement, either. Level-5 is very much like a Western AAA developer – they make games that are graphically sumptuous, filled with charm, and are appealing to global audiences. And that, I feel, is their major problem.

My general disdain towards AAA development and the resulting products isn’t exactly hidden – hell, my pinned tweet, as of this writing, is a jokey jab at both AAA games and people who claim certain women in media want to destroy videogames. And yes, I’ll acknowledge that AAA dev does produce some really fantastic stuff every so often. But I feel like a lot of the current push for AAA products is stagnant to gaming as an artistic medium and toxic to the people involved in development of these games. When I think “AAA game,” I think “A game with a heavy over-investment in visuals, designed by corporate committee to hit as many box-back selling points as possible, stripped of anything truly daring or unorthodox to make it appealing to the largest possible audience, and put together by a team of overworked people in an unhealthy crunch environment.”

Not coincidentally, this description also fits the many of the products Level-5 puts out.

Let’s take Ni no Kuni as an example. I gave the game a pretty solid score when I reviewed it for @gamer magazine years ago, and I stand by it, because I feel like the majority of people who will play the game will probably like its beautifully rendered, Studio Ghibli-designed visuals and whimsical fantasy environments. Here’s the thing, though: despite having reviewed the game, I remember next to nothing about the story, the characters, specific dramatic moments, anything. It was just like a typical Hollywood blockbuster: entertaining for its duration, but when you step away from it, you remember nothing but its flaws – in Ni no Kuni’s case, the annoying characters and the really, really bad combat. It’s the same feeling I get when I play Western AAA titles – some enjoyment when I’m playing, but stepping away from it, I’m like “Why did I waste time with that? It really didn’t do anything besides provide eye candy and fleeting amusement. 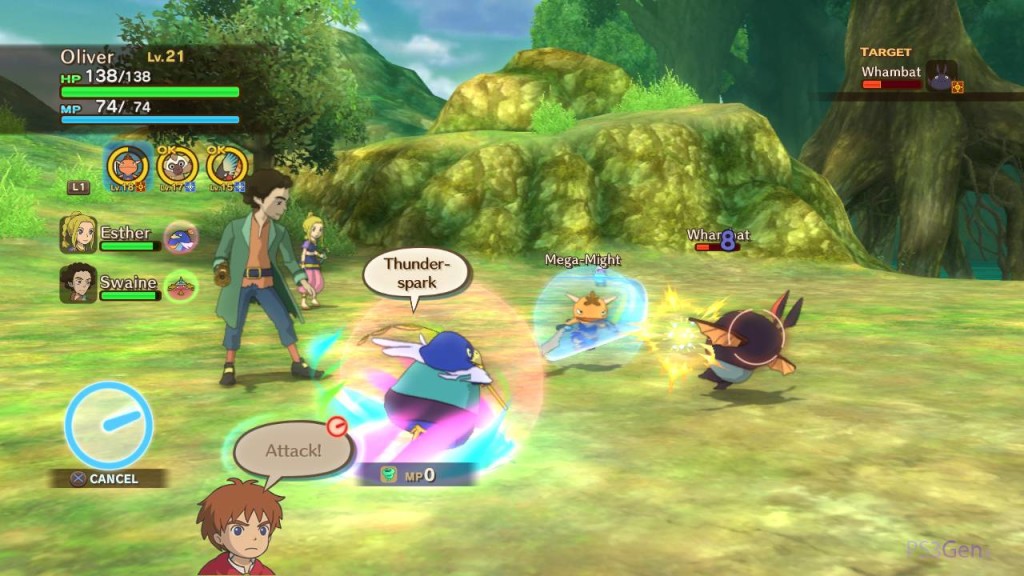 “Bad combat” seems to be a complaint I have for many Level-5 titles: Fantasy Life, Ni no Kuni, Yo-Kai Watch, White Knight Chronicles, and so on. As beautiful and engaging as a lot of the worlds of these games are, they are a lot more fun to explore than they are to play in. (I’ve gone on record as saying Yo-Kai Watch would be improved significantly if they removed combat altogether and simply had the game be about doing fun things with cool monsters.) Level-5 is more than capable of creating worlds that look nice and have a lot of appeal, but aren’t particularly enjoyable to immerse yourself in. It feels like the games are marketed more on image and ideas than the actual execution, but because the images and concepts of the games are so appealing, people are willing to overlook the stretches of dreadfully dull gameplay. Simply because of the game’s “charm.”

See, that’s also a thing you hear a lot in reference to Level-5 games: how charming they are. Charm carries a lot of weight in games: I’ve given some pretty flagrant gameplay sins a pass because something about certain games just appeals to me on a more base level. Games like the Professor Layton series, Ni no Kuni, Yo-Kai Watch, Fantasy Life, and Inazuma Eleven are frequently described as “charming” by players and reviewers alike. But the issue I have with Level-5’s brand of “charm” is that it’s cynically manufactured for broad appeal in the same way as your average Sanrio product offering. There’s nothing truly creative or endearing about it, almost as if a group of people high up at the company just leafed through concept art and story ideas, making notes on which would inspire the most “d’awwwwwws” and “squeeees” from players and insisting on putting those in the games. 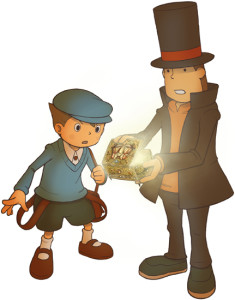 Really, so much of Level-5’s output feels like design-by-committee, carefully engineered to appeal to a wide audience and be generic and inoffensive to ensure as many sales as possible. Professor Layton’s faux-European stylings were chosen because they have an inherent global appeal. Studio Ghibli was contracted for Ni no Kuni because they make “respectable” anime that the mainstream public doesn’t dismiss as sexy-teenager nerd garbage. Inazuma Eleven is about soccer because practically every goddamned country on the planet except for the good ol’ US of A adores it. And as soon as the very Japanese Yo-Kai Watch became a hit in its homeland, Level-5 was hard at work looking at ways to make it palatable abroad. Very little about these games feels genuinely creative or imaginative in the same way that many of the great all-time game classics do.

So yes, Level-5 tends to make very safe, very marketable games that appeal to the broadest possible audience in incredibly boring and uninspired ways. There’s absolutely no reason for them to stop doing this, either: their attempts at making more experimental games, the Guild series, flopped hard. It’s a shame, too, because those are absolutely Level-5’s best products: they’re a series of smaller games developed by various Japanese game creators like Goichi Suda/Suda51, Kaz Ayabe, and Yasumi Matsuno.1 Every once in a while the “sure thing” formula totally flops, like with Gundam AGE, but when it works the majority of the time there’s really no reason to try to change it up much. I guess most people will enjoy this stuff, but it’s not doing anything to challenge or innovate within the medium, or even really be fun to play.

There’s also the issue of Level-5 quickly moving from hot property to hot property, completely dropping previous established franchises when something else comes along. Professor Layton was their big thing for a while until Inazuma Eleven blew up, at which point the game quality (and sales) began to taper off noticeably. And as soon as Yo-Kai Watch sales began picking up, Inazuma Eleven was kicked to the curb – the last release from that series was an online PC game that didn’t even last a year. 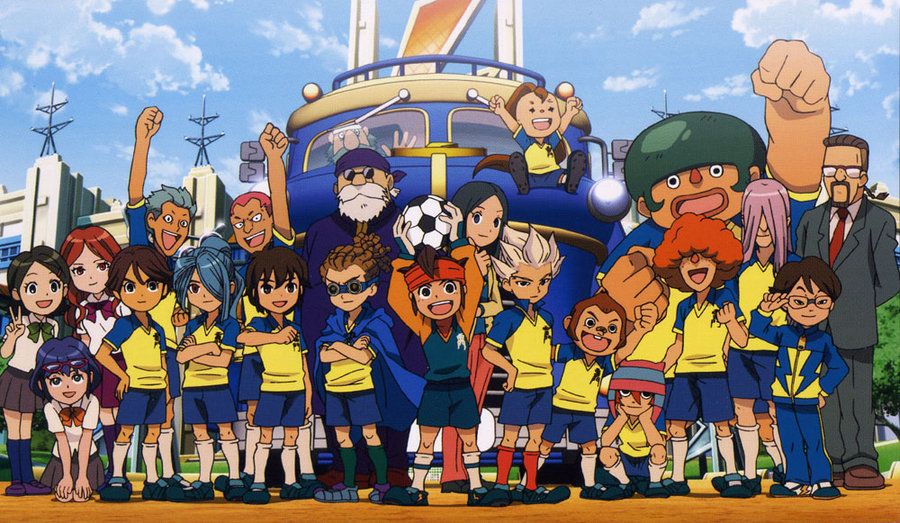 I will say, though, that Level-5 seems to be at their best when someone is overseeing them. Both Dragon Quest 8 and 9 were a lot of fun. Sadly, they don’t develop for other peoples’ franchises often – it feels like them having to work alongside other companies with a clear vision for the product seems to bring out a lot of their strengths as a developer.

So, there you have it: my personal hot take on Level-5, laid out here for everyone to read. I doubt having written this will change anything, really – Level-5 seems perfectly content to be Japan’s equivalent of a Western AAA dev, and no editorial on a personal site is going to affect that. But if you see me just kind of standing off to the side while the rest of the Japanese gaming sphere loses their mind over Fantasy Life 2 or the next Ni no Kuni, well, hopefully you understand why.

Misadventures in Romancing SaGa, part 1 of ???