We recently covered the phenomena of arcade games using the implication of terrible things happening to the hero and/or the world, so now it’s time to move on to the second kind of disturbing game over: games that rub it in extra hard when you’ve run out of time, lives, and continues. You’ve really screwed the pooch now, and by god, you are going to have to face the consequences!

In the interests of keeping this from getting much too long, I’ve decided to forgo game overs from survival horror games. Bloody, horrifying deaths come with the territory in those games, so it’s not particularly interesting to investigate them, in my opinion.1 In a way, it’s a more shocking if the creepy and/or shaming elements come completely out of left field than it is if you’ve dealt with the threat of evisceration for your entire playtime.

There are also a few more obscure samples I want to include, but I lack the capability to capture them myself at the moment, and all the pre-existing images and footage of them online are woefully sub-par in quality. There’s a good chance this feature will be revised in the future to include these once I’m able to adequately showcase them, so keep your eyes on the Gaming.moe Twitter for updates.

Without further ado, it’s time to venture into a world of shame and failure!

Let’s start with a screen that, by current standards, is incredibly simple, but proved to be horrifying for folks my age who grew up on the NES.

That laugh and image are already creepy enough,  but the implication of “wow you REALLY screwed up” makes it even worse. It’s one of the many improvements (can you really call it that?) to the NES version of Zelda II, as the FDS version was nowhere near as striking. 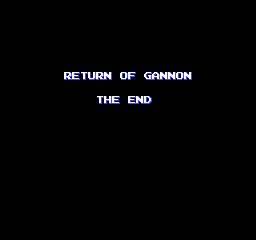 One of my gaming pals back when I was young played a lot of the Operation Wolf port for the NES. He also really sucked at it, which meant that 90% of the time, his games would end like this within minutes:

The other 10% of the time he lucked out and got taken as a POW, which made the game last slightly longer. To be fair, though, Operation Wolf is pretty darn merciless: You can beat the game and still get this as an ending.

If you’ve ever played Battletoads, you know that its difficulty level is downright stupid, and you will be seeing the Game Over screen a lot. I’m sure the developers at Rare were aware of this, as there are a couple of variations in the game over dialogue you get should you refuse to/run out of continues. There’s one in particular that’s definitely worse than the others:

Usually you just get mocked, but this particular sequence’s implication that your team’s carcasses are being devoured by your foes is certainly… unsettling, to say the very least.

Let’s move on into the 16-bit era home console era. Game Overing in Chrono Trigger most of the time just gets you a musical ditty and a trip back to the save/load screen, but if you lose to Lavos, well…

Does anyone remember Awesome Possum? God, I hope not. It could be argued that this game over screen is less “creepy” and more “what that little mouthy jerk who won’t shut up ever truly deserves.” I’ll go with the latter.

In the last feature, we talked about how arcade games would use guilt trips to get you to continue. Some arcade games like to pull the ultimate dick move, however: once you get to a certain point, you can’t continue any more. Even worse, some will come with an elaborate Game Over sequence to really rub in your failure (and wasted coins getting to that point). Take, for example, losing to M. Bison in Street Fighter Alpha 3:

Perhaps even more memorable, however, is NAM-1975, where the absurdly difficult final encounter shows no mercy should you fail. (thanks BBH!)

When I first brought up this subject on Twitter, several folks mentioned the game over scenes from the Metroid Prime series. Personally, I think the Terminal Corruption Game Over from Prime 3 is the most striking of the bunch. The combination of the agonized Samus scream and the weird imagery make it incredibly effective and memorable.

Just as Zelda II terrorized children of the NES era, Majora’s Mask came along a little over a decade later with plenty of nightmare fuel in tow, not least of which is what occurs should the timer run out on the game’s three-day clock.

They actually softened this up a bit in the 3DS version: you get a message in-between Majora’s Mask flashing and the terrible fate dialogue saying that while the world was annihilated, you can still try again from your last save by pressing the home button!

It definitely takes a lot of the punch out of it by reminding you that you can restart. The moon shouldn’t break the fourth wall as it smashes the world to dust, guys!

Implying death and destruction isn’t the only kind of disturbing Game Over, however. Rare’s N64 platformers tended to have fairly elaborate Game Over sequences, and the most memorable of the bunch (for all the wrong reasons) is Banjo-Kazooie. The game’s plot featured the wicked witch Gruntilda attempting to steal the, uh, “beauty” of Banjo’s cuddly bear sister Tooty. She succeeds if you Game Over, and the results are quite uncomfortable.

I have no doubt that this sequence also inspired many extremely awkward feelings and odd fixations in adolescent boys playing this game at the time. If you don’t believe me, a simple Google Image Search for “sexy Gruntilda” should be adequate.

We also have the awful, awful TimeCop for SNES, whose Game Over screen is disturbing in ways the developers probably didn’t intend it to be.

And let’s not forget Elite Beat Agents. There are a lot of disastrous game overs in this game, but none that are quite as demoralizing as failing You’re the Inspiration. Should you screw the pooch here, you’ll b condemning a widow and her daughter to a lifetime of sadness and grief over the loss of a father. All because you couldn’t tap the screen right, you heartless jerk.

A particularly strange case is that of arcade rarity Chimera Beast. The game has you controlling an invasive alien species called Eaters as they consume lifeforms on an Earth-like planet. There are special game overs if you don’t continue in the last stage, but it might not be what you expect!

Yup, the “game over” is technically the good ending!  So what’s the bad ending? Well, if you beat the game, this happens, and it’s quite the shock:

There’s only one thing we can end this on, and that’s the amazing game over from mid-90s PC adventure game Total Distortion. If you’ve never seen this before, prepare for one of the most amazing works of art to ever come out of the medium of videogames. I first heard this courtesy of Dan Amrich a while ago, and it’s still one of my very favorite things. Enjoy!

Disturbing Game Overs, part I: A Quarter Can Save a Life