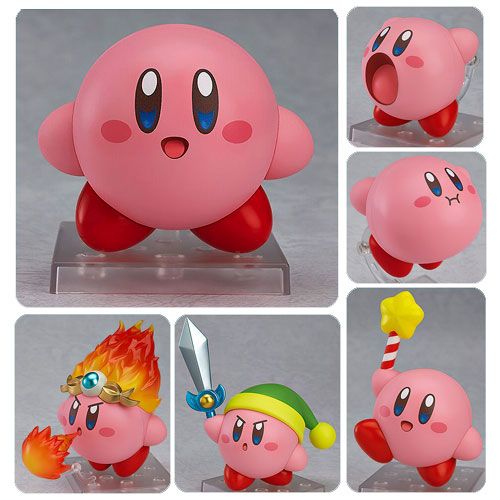 Jeez, do you know how long I’ve wanted to do a proper figure review on this site? I’ve done plenty of reports on interesting gaming stuff coming from the Wonder Festivals, but I haven’t really sat down to review a complete product yet. The main reason is that my photography setup isn’t particularly ideal: I don’t have a mini-booth or anything for shooting pictures in, and my best camera is my iPhone 6S. For reviews like these, photography is a pretty crucial element.

But, eventually, I felt like I just had to suck it up and make do with what I had on hand. After all, pictures might be worth a thousand words, but I could also write thousands more words to go with them if I had to!

Of course, then I had to choose a subject. There were two figures I really wanted to talk about, one smaller and fairly inexpensive and another that was positioned as a more high-end product. I figured we should start with the smaller one first — not only did it turn out to be the better piece overall, it’s also one of Nintendo’s most beloved characters, with a new game due out just a few months from now. 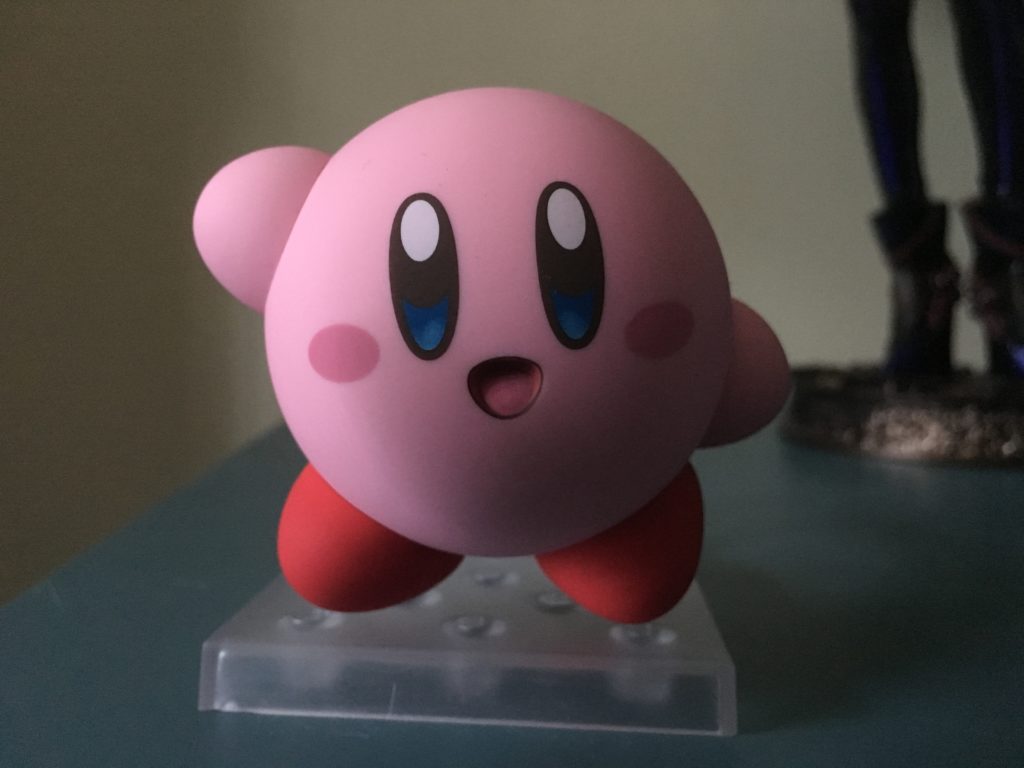 Yes, it’s Nendoroid Kirby! For those unfamiliar, Nendoroids are a line of collector toys made by Good Smile Company in Japan. They’re proportioned to be about 3-4 inches tall, have (at least) some basic articulation, and feature a lot of accessories, limbs, and faces you can swap between as you please. A wide assortment of characters have been made into Nendoroids (of which there are nearly six hundred different varieties of): anime and manga characters, company mascots, even popular characters from American comics and Hollywood films. Of course, what we’re interested in here are gaming characters, and Kirby definitely fits into that category!

Of course, the thing about Nendoroids is that they’re generally based on humanoid characters. There have been some exceptions — Sonic the Hedgehog and Jack Frost Nendoroids exist — but even they follow a vaguely human shape. Kirby, however, is a malleable, amorphous puffball, whose arms and legs seem to just sprout from his mass rather than be connected to a particular joint. The moment the first protoype pictures of Nendoroid Kirby surfaced, I wondered, “How are they going to handle his limbs?!” 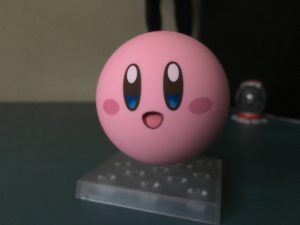 Almost everything about the Kirby nendoroid involves magnetic attachments, which is an absolute genius move of engineering on the parts of the figure designers. Rather than slotting arms and legs into pegs, Kirby’s limbs snap into place anywhere on his body. Take them off, and you’ve got a soft, perfectly round ball of Kirb. (Did I mention GSC made his body out of soft, rubberized plastic? They really thought this through.) Nendoroids have always been rather iffy in the poseability department due to the small, stubby nature of the limbs and the tiny pegs everything has to sit in. Through the use of magnets to attach and detach arms and feet, Kirby has blown everything else in the Nendoroid line out of the water in terms of posing.

Being able to change facial expressions is another key component of the Nendoroid line – every figure comes with different facial expressions you can swap in. Kirby is no different, though the means of changing his face out is a little different. First you need to twist the front half of the figure counter-clockwise, and- 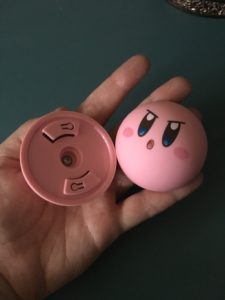 Don’t be upset, Kirby! We’re going to have you back together soon enough. All it takes is a simple flick of the wrist to lock the faceplate into place. 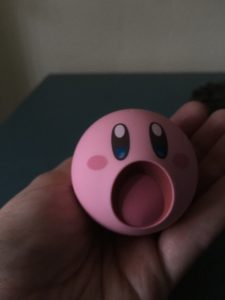 The two halves fit very tightly together, so much so that the seam between the two is practically unnoticeable at certain angles and lighting conditions. The limbs sit flush with the body, too, so you don’t wind up with any conspicuous, awkward-looking gaps between parts. 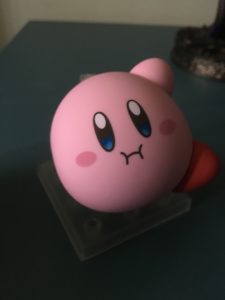 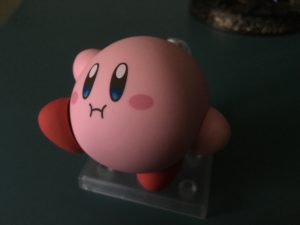 And then the right… 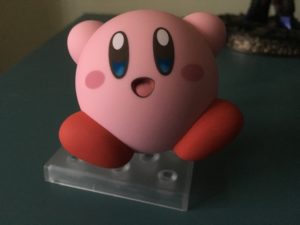 As you probably noticed from the photos, Kirby comes with four expressions: Smiling, US Box Art Angry Kirby, Mouth Open, and Holding A Thing in His Mouth. He also comes with plenty of fun accessories! 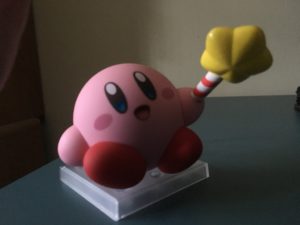 First off is the mythical Star Rod. Kirby comes with an additional limb with an indentation you can fit certain accessories into so that he can “hold” them. This star rod, sadly, doesn’t actually shoot stars, but it looks pretty darn cool. The glossy point on the star part is a nice touch. 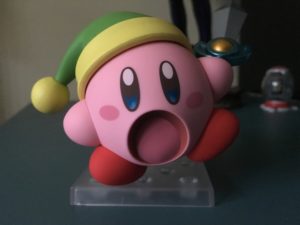 And here’s Sword power Kirby! Not only does he have a sword he can wield, but he’s got the Link-inspired hat to accompany it. The hat, unfortunately, is probably the worst accessory in the set. I think there’s a magnet in it, but it seems placed a little too high up to form a proper attachment with the body, so the hat has an unfortunate tendency to slide a bit when you’re trying to put it on. (You can see it falling off the back a bit in this picture.) 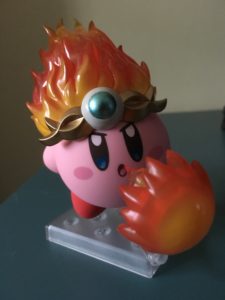 Finally, there’s Fire Kirby. His blazing mane here fits a lot better than the Sword hat does, and it looks pretty darn cool to boot. (The detailing on the fire colors isn’t quite as good as some other figures I’ve seen, but it’s still quite nice for a piece in this price range.) There’s a fireball part that comes with a small, clear plastic swivel-lever: one part attaches to the fireball and the other to the stand, so you can make it look like Kirby’s spitting fire. In practice, this is actually rather hard to do, since the Nendoroid stand doesn’t give you much room to work with. This picture was the best I managed to do.

I should mention that there’s another accessory, as well: The version you could order from the Good Smile Online Shop (that’s no longer available) also came with a Maxim Tomato. The problem with GSC’s shop is that the items are sold at full retail price (as opposed to the discounts you can find elsewhere), and shipping is a flat 2000 yen, even if you’re only buying one small thing. I’m not paying $20-25 more than I could elsewhere for a tiny plastic tomato, thanks. 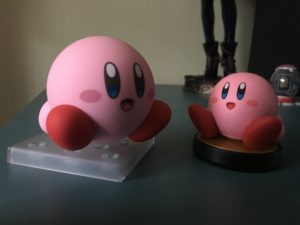 Don’t talk to me or my son ever again

What makes Nendoroid Kirby so great is how much fun he is to play with. You can easily and effortlessly pose his arms, limbs, and accessories to look just the way you want them without having to worry about breaking tiny little parts or having gravity screw up your killer posing idea. I’ve seen people do some really creative stuff with him, including amateur stop motion animation bits. 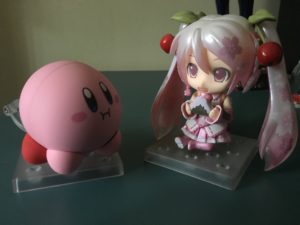 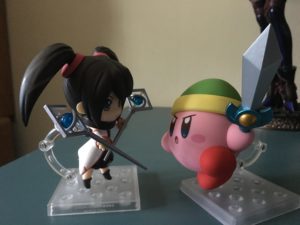 The versatility of the figure, combined with a nice selection of accessories and faces and a solid-feeling craftsmanship, makes for one of the best Nendoroids I’ve yet encountered. Making a properly movable figure of Kirby was a challenge that GSC passed with flying colors. Even the box (which I stupidly put into storage before taking pictures) shows how much care was put into this: the inside insert is a diorama with a Kirby-themed background and enemy characters.

I ordered this figure directly from Japan – MSRP is about 4,200 yen, but with discounts, I got mine for about 3,000 yen shipped via SAL. The first manufacturing run of these sold out super quickly, but a second one is on the way for Japanese retailers – and it seems like US retailers are starting to get some stock in as well, selling in about the $35-45 range. Usually I find those prices a little steep for Nendoroids, but Kirby’s easily worth it. Overall, this is a stellar product – well-made, easy and fun to play around with, accurate to the property it’s representing, and incredibly well engineered. 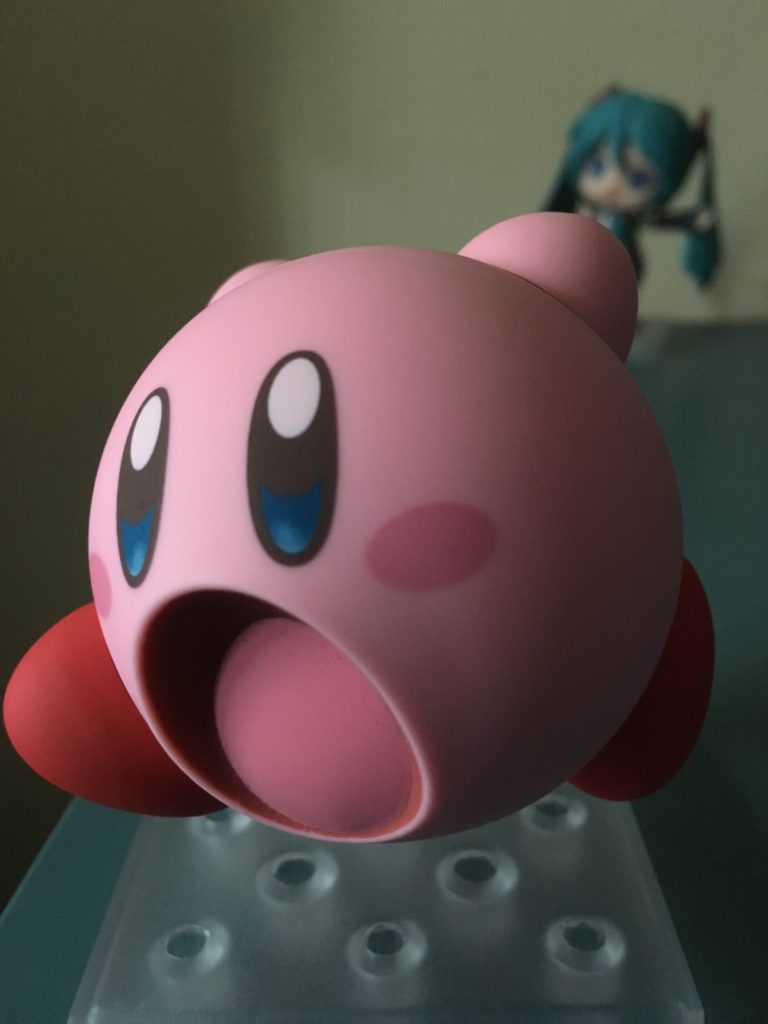