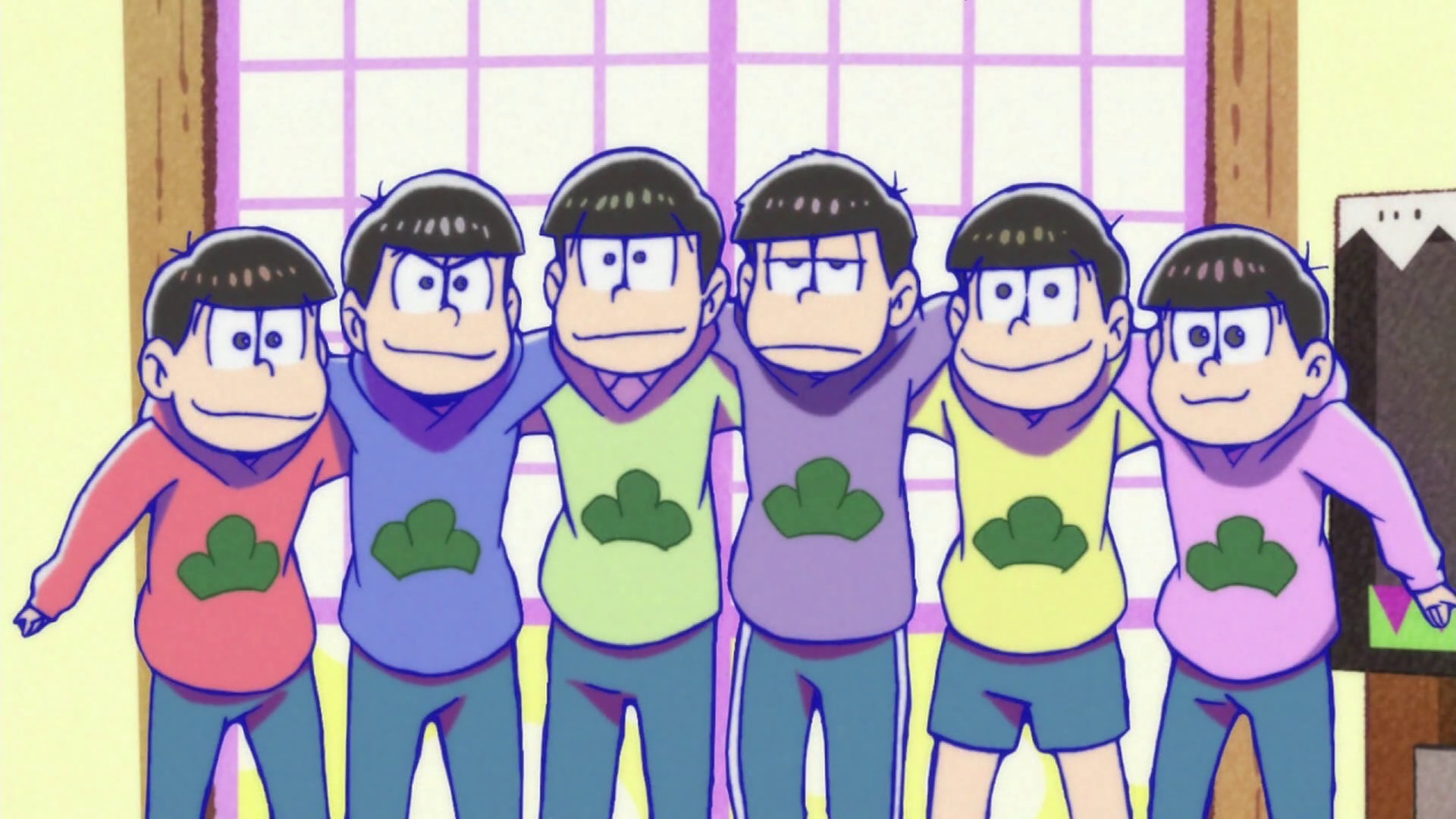 The irony of anime being easier to legally enjoy than ever before, thanks to online streaming and simulcasts, is that I’m actually watching less anime than I did when I was younger. I’m not sure why, either. Maybe it’s because the flood of new series that comes out with each season is overwhelming. Or maybe it’s because I’m an old fart who prefers the general look and stylings of anime from the 80s and early 90s. Or hell, it could just be that the list of hundreds upon hundreds of games I want to examine is higher priority. As a result, there’s a lot of stuff I want to watch, and fully intend to watch… someday. Mostly stuff folks online have given high praises, like Monthly Girls’ Nozaki-kun, Ore Monogatari, Tatami Galaxy, Showa Genroku Rakugo Shinju, and a whole shitload of Gintama. (And maybe some Ushio and Tora too, y’know, to satiate my love of out-of-left-field throwbacks.)

My viewing habits have changed, too: rather than buying DVDs volume by volume as I did in the early aughts, I prefer to binge-watch batches of stuff when the time arises. I make a few exceptions: I eagerly ate up SeHa Girls when it came out, and I’m watching the adaptation of Jojo part 4 weekly. Generally, though, I like my anime in meaty chunks — which is how I opted to view the subject of today’s article. I watched most of the first half of Osomatsu-san before I left for my Japan trip, and blazed through the rest of it last weekend in-between some writing, which was probably the ideal way to consume this show: Once you get a taste of the Matsuno brothers, you want another hit of it as soon as possible.

It’s a damn fine show, is what I’m saying.

So what is Osomatsu-san about?  The setup here is that there’s a group of six sextuplets, the Matsuno brothers: Osomatsu, Karamatsu, Choromatsu, Ichimatsu, Jyushimatsu, and Todomatsu. They were the subject of a popular gag manga from the 60s — called Osomatsu-kun — by “the god of gag manga”, Fujio Akatsuka, where they got into high-larious kartoon high-jinks with a cast of assorted weirdos. It was pretty simple stuff, with a lot of goofy cartoon humor and sight gags. As happens to many such shows, the antagonists eventually started stealing the spotlight, with scheming, buck-toothed sleazebag Iyami and semi-rival Chibita often pulling the focus away from the Matsunos. Other characters, like the relatively normal young girl Totoko, literal flag-boy Hatabou, and weird flappy-faced creeper Dayon would also take part in whatever bizarre scenario was happening that time around. There were two anime series based on Osomatsu-kun: an early black-and-white show from 1966 and another, more recent show from 1988, both of which followed this formula. 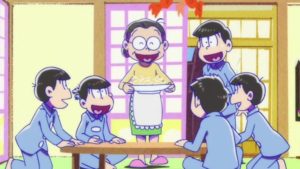 Osomatsu-san, however, takes those six sextuplets and asks the question, “what if all of these kids grew up to be terrible, terrible people with no goals in life whatsoever while still living in this semi-fantastical slapstick cartoon universe?” It’s a question that I don’t think anyone involved with the original series was really considering, but I’m glad somebody was, because we got this show as a result. It should be pretty obvious from my description that this is a comedy show, but what makes it so special that it manages to skillfully combine a lot of different types of comedy — situational, slapstick, sight gags, bawdy jokes, and so on — into a very entertaining package.

The driving force behind much of the humor are the brothers, who are each given a specific character archetype. Karamatsu is a self-absorbed type who’s convinced he’s a natural playboy, Choromatsu is smart, driven, organized, and a not-so-secret raging otaku, Ichimatsu is a brooding, morose loner with a thing for cats, Jyushimatsu is overly energetic and random, Todomatsu is gentle and kind in a self-serving way, and Osomatsu is just a general loser with a bad pachinko habit. Much of the situational comedy plays off of their personalities and quirks very well, and the rogue’s gallery of strange supporting characters helps to bring out more humor from what passes for the brothers’ daily lives.

This might sound fairly down-to-earth, but actually, the show is anything but. Osomatsu-san exists in a weird, fourth-wall-shattering cartoon universe, filled with non sequitirs, rampant destruction, bizarre scenarios, and freaky caricatures. It only sort of has a continuity. There will often be bits where they just have strange “what if” scenarios (What if all the Matsunos were women, or were businessmen, or were all beautiful men fighting for justice in a Mad Max post-apocalypse?), or even the occasional bit focusing on the sheer weirdness of the supporting cast. While slapstick might be considered “low humor” by some, it’s put to excellent use here, with the goofy character designs helping to accentuate the physical comedy and allowing the animators to do some really fun sequences. The sight gags are among my favorite jokes in the show, particularly the expressions the characters exhibit. It’s damn near impossible to look at some of these faces and not completely crack up. 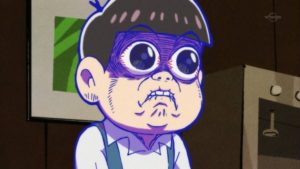 The show has a lot of variety, which is both good and bad: good in that you can truly never predict where it’s going and that every episode will be fresh and surprising, bad in that some sequences and episodes are not going to be quite as good as others. Comedies are rarely every consistent — you’re always going to have some episodes that hit the mark a lot more than others — but even at its worst, I found Osomatsu-san entertaining. Even if I wasn’t laughing out loud, I was enjoying myself – the writers, animators, voice actors, and other staff seemed to be having a lot of fun making this weird-ass cartoon, and it shows. Even when the show takes a rare turn towards serious subject matter, it manages to hit its beats so well and without seeming dissonant in tone that it really impresses. (Of course, then it speeds right back into comedy gear like nothing’s amiss.)

Much as I loved the show, however, I have a few reservations when recommending it. The most obvious problem is that, legally, you can’t actually watch the whole thing. The first episode, which is a sendup of the recent “male idol anime” boom and has a lot of other references to popular series, is no longer available for streaming anywhere. You can’t even get it on the official Japanese Blu-Rays — the producers claimed they were “reanimating the episode” for home video release, but that hasn’t come to pass. You can jump into Osomatsu-san pretty easily starting at Episode 2 — given that the basis for the show is 50 years old, it had to be written in a way that unfamiliar folks could jump in and enjoy — but you will be missing some really, really funny material. A portion of Episode 3 had to be cut, as well. 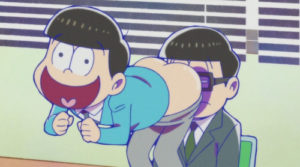 You can catch the rest of the episodes over on Crunchyroll, though the subtitles are rather inconsistent in quality. There are a fair few puns and language-related jokes in the show, and the subtitles can’t seem to decide if they want to rewrite the jokes, do “translator’s notes”-type deals, or just not touch them at all. One particularly amusing bit involves a joke where food to be sold at a school festival’s booth are being described, with the punchline being that they all either look or sound like sexual terms in Japanese. The subtitles don’t even allude to this beyond the visual gags, making the full impact of the sequence fall flat.

In fact, that might be the biggest problem I have with recommending Osomatsu-san to everybody: there’s a fair bit of humor steeped in knowledge of Japanese cultural bits. Sure, the episode where they’re all trying to avoid refilling the kerosene heater is still funny if you don’t know that Japanese houses typically don’t have central heating, because the situation itself is amusing. Other bits, like a sequence in Episode 2 where Osomatsu is making a heartfelt plea to Iyami to loan him cash, only to reply with a twisting-hand motion when Iyami asks what he needs it for, is a lot less likely to be understood. (The gesture, if you’re curious, implies that he’s going to use the money to play pachinko.)  I feel like I understood a lot of the references and humor, but I really wonder if someone less steeped in this stuff would enjoy the show nearly as much. 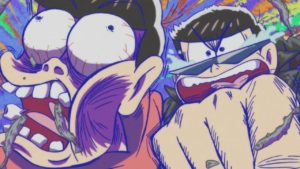 It’s worth noting that Osomatsu-san did exceptionally well in Japan, particularly among female viewers, and very particularly amongst the fujoshi. My trip to Otome Road in Ikebukuro was punctuated with a staggering amount of Osomatsu-san character goods and doujin, and by that point, the series was only halfway through its run!

Anime survey at the Ikebukuro Toranoana. The dots are customer votes. There's a clear winner. pic.twitter.com/A37wpRBGFi

You can tell from the first episode that they were toying a bit with this audience, but by the time the second cour comes around, the production staff is well aware that the rotten ladies are eating this up, and up their pandering noticeably. It doesn’t affect the show’s comedy — in fact, it results in some of the funniest scenarios in the series — but it’s hard not to think of what’s in there simply to satisfy someone’s shipping fantasy.

In any case, I’m glad that Osomatsu-san has become a hit. It’s a great show that deserves to do well, first and foremost. What makes me particularly happy, though, is that its existence is making Western fans aware of the long legacy of comedy manga. There are a lot of beloved gag anime and manga in Japan, but they usually get passed over without a second thought by Western fans because the art looks simple and cartoony next to more detailed panels or character designs. (Never mind the fact that good cartooning is an artform in itself!) Osomatsu-san’s success is giving people a reason to take a closer look at some of this stuff, a lot of which is far more popular and respected in mainstream Japanese society than whatever the current otaku fad is.1

You can catch (most of) Osomatsu-san over at Crunchyroll. It’s 25 episodes long, and they tend to go pretty quickly. (Episode 12 is a clip show you can safely skip, but I recommend watching the version with voice actor commentary.) Here’s to hoping another Osomatsu- series in this vein is in the works. The Matsunos certainly deserve a long, enjoyable career of being hopeless losers in the spotlight.

Book Review: Legends of Localization Book 1: The Legend of Zelda by Clyde Mandelin