When your games are as heavily character-driven as visual novels are, having memorable character design is an absolute necessity. One of the best examples is the Ace Attorney series, which has delighted players worldwide with its engaging, distinctive casts of characters. The man behind many of character designs in the earlier Ace Attorney titles was one Tatsuro Iwamoto.

Iwatamoto is now freelance, doing jobs like creating the hunky dudes for Comcept/Idea Factory’s otome game Sweet Fuse (published abroad by Aksys Games) and, most recently, the character designs for the upcoming Monster Strike anime adaptation.1 Though he’s branching out quite a bit, it’s still Ace Attorney that is his most prolific work to this date. I had an opportunity a while back at Japan Expo USA 2013 for a short chat with Iwamoto about his time with Capcom and his work on Ace Attorney in particular. Read on to learn more about some of Capcom’s most endearing characters… and maybe some Michael Douglas movies, too.

How did you first break into the art field?

I originally studied art at a university, but once that had wrapped up, I was wondering where to go from there. I started looking at the field of games, and I wound up applying at Capcom. I passed the tests they gave me, and that served as my introduction to the art field.

How long did you work there?

I joined around 2000, and worked at Capcom for seven years, including my time with Clover Studio.

So people like Kinu Nishimura and Gouda Cheese for still on staff around then.

Yeah, Gouda Cheese has a cute pen name, doesn’t he? *laughs* Capcom was such a big company, so I really didn’t get to talk to them much. But I could always feel their presence, and I thought they were truly amazing people. I did see them from time to time, though. When I saw their art for posters for Street Fighter II – along with Akiman’s work – at game centers way back when,  it really inspired me. They definitely influenced my art style.

What was your first project for Capcom?

Hmmm, that’s a pretty interesting project out of the gate. Part of what really makes those games special is the way characters’ personalities are reflected in their visual designs. Can you elaborate on the character creation process?

It didn’t seem like too unusual of a starting project for me. When we first began, the team and project was really small – only seven people. We honestly didn’t expect that the game would become as popular as it has.

As for the creation process, what usually happens is that the director comes up and says “Oh, we need a character with this sort of personality” and such. My job for the first game was to listen to what he wanted – since we started with what was just a story outline – and then try to exceed his expectations. Like, if he wanted a cool character… I’d make them really, really cool! If it’s a young girl, I’ll try to make her really cute.

You’ve come up with some really weird and outlandish character designs through that process. What would you say is the wackiest design you’ve managed to get into the games? 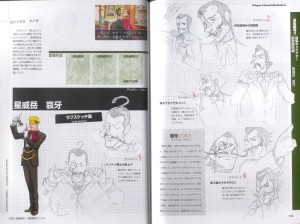 Surprisingly, this design actually wound up being pretty popular among fans in Japan, so I was quite happy about it!

Ah yes, that nose. My first thought when I saw him was Jet from Cyborg 009.

Ah, I wouldn’t say that was the inspiration… though I can see what you’re saying. In Japan, we have a saying – “hana ga takai.” It literally means “Your nose is long/high”  but it’s also an idiom meaning you see yourself as above everyone else. I took that phrase and made his nose long, since it matched his personality.

So what would you say is your favorite character design overall?

Yeah, he’s certainly one of the most enduringly popular characters in the series. Can you describe how you created his memorable design?

I wanted to create something like a “cool older brother” kind of character. I took a few examples from artists, people, and characters I look up to, like Roy Batty (played by Rutger Hauer) in Blade Runner. There’s also a more obscure American movie called Black Rain, and I really like Yusaku Matsuda in that film as well. The visor came from my favorite mecha anime. It might seem crazy, but I took everyone I really admired and just kind of mashed them up into a single character, and Godot was the result. That’s why I have such a strong connection to Godot.

Michael Douglas stars in it, too. You should definitely see it. I recommend it. *laughs* 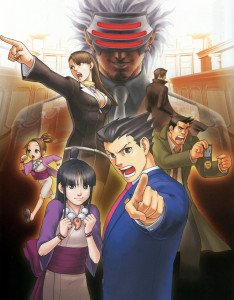 The characters in-game go through a lot of different poses and animations. Did you supervise those, as well?

I didn’t personally work on Ace Attorney 4 or 5, but for the original trilogy, I was definitely involved. I created some animations alongside of the characters, and I also oversaw the process of how they were being animated in-game.

Since you’re not at Capcom right now, what are your current personal projects?

At the moment, I’m trying to become a manga artist. I’m still in the planning process., but hopefully you’ll see something soon.

Is it manga from a major publisher, or a doujin endeavor?

I definitely want to do some doujin stuff, but I’m hoping this particular project will be widely published. I do exhibit at Comiket from time to time, if I’m able to make it through the circle selection lottery. The name of my circle is Mankan Zenseki (満漢全席).