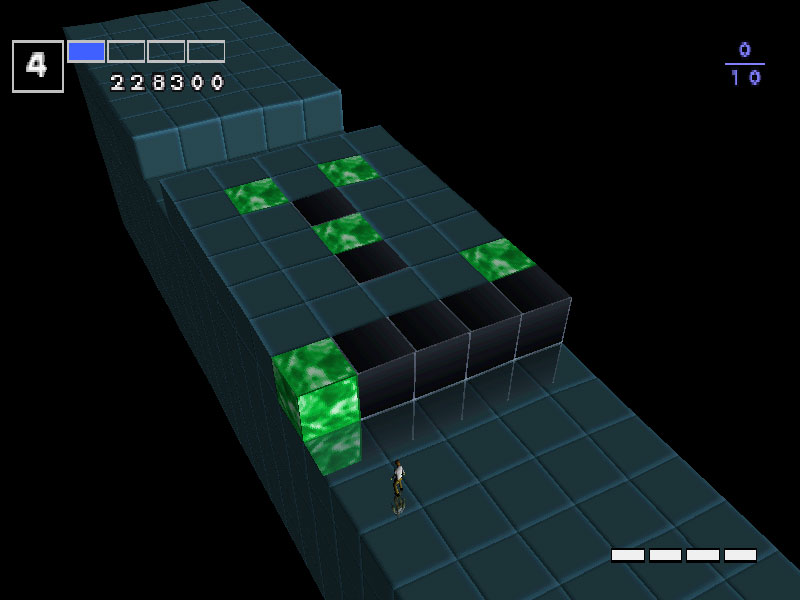 Over the last month I participated in the SpeedRunsLive Mystery Game tournament, which just wrapped up this weekend and proved to be an exceptionally fun experience. I plan to write a more detailed post about the event shortly, but for now I can say that it’s something I highly encourage people interested in exploring a wide variety of games to participate in.

One of the games I drew (out of the four matches I played “officially”) was Intelligent Qube (“Kurushi”1 in Europe for whatever odd reason), a PSOne title that I’d heard of but hadn’t played before. It’s a very interesting game: its rules are somewhat complicated to explain but easy to grasp once you actually start playing. That isn’t to say that Intelligent Qube is easy. In fact, it’s extremely unforgiving, to the point where even minor mistakes made early on can come back and bite you in the ass later on, and a small slip-up can incur severe penalties. But every mistake you make is your own fault: the game is harsh, yet fair. It’s undeniably a clever, well-designed action/puzzle game, but it just didn’t click with me. Spatial puzzles have never been a strong suit of mine, and keeping track of the positions of multiple cubes and panels and such just kind of overwhelms me after a bit. (That, and I keep getting smooshed.) I can certainly see the appeal, but it’s not for me.

What I did really enjoy about the game, however, was its soundtrack, which took me completely by surprise. Usually when you think of puzzle game music, you think of boppy, catchy tunes that keep you alert while you’re figuring out a solution. Intelligent Qube’s soundtrack goes a distinctly different route, featuring big, bombastic orchestral pieces. Here’s my personal favorite.

Readers who were watching the stream I played IQ on can probably remember me making remarks about the music’s quality and wondering who the composer was. I suspected it was Hitoshi Sakimoto at first – it has a bit of an orchestral FF Tactics/Tactics Ogre vibe to it – but the composer is actually Takayuki Hattori, who actually does a lot of anime and live-action drama music, according to his Wikipedia entry. I suppose that’s why IQ’s soundtrack doesn’t quite give off that typical “game music” vibe.

Since I more or less stymied around stage 4 during my playthrough, I decided to look into what the game’s final stage looks like… and I’m now both impressed and terrified. There’s pretty much no way I could do this without panicking.